Australian senator Fraser Anning has been criticised after he called for a "final solution" vote to ban Muslim migration. The Final Solution was a Nazi plan for the extermination of Jewish people during the second World War. 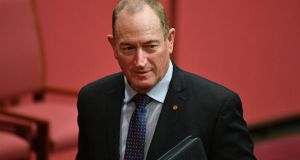 Katter’s Australian Party senator Fraser Anning at Parliament House in Canberra on Tuesday. Prime minister Malcolm Turnbull called his remarks a “shocking insult” to the millions of Jews who perished in the Holocaust. Photograph: Mick Tsikas/EPA

An Australian politician invoked a Nazi euphemism for genocide on Tuesday, calling for a “final solution to the immigration problem” during a speech in parliament in which he proposed a national plebiscite on banning all Muslims from entering the country.

“We as a nation are entitled to insist that those who are allowed to come here predominantly reflect the historic European-Christian composition of society and embrace our language, culture and values as a people,” said senator Fraser Anning, a member of Katter’s Australian Party, a small, conservative political party.

“The final solution to the immigration problem, of course,” Mr Anning said in his first speech since his election, “is a popular vote.”

On Wednesday, leaders from across the political spectrum condemned Mr Anning’s speech. Prime minister Malcolm Turnbull called the remarks a “shocking insult” to the millions of Jews who perished in the Holocaust, and he used the moment to appeal to Australia’s Muslim population.

“The Islamist terrorists’ argument to other Muslims is: ‘Australia is not your country. They don’t want you. They hate you. You’re not ever going to be really Australian. Join the war on our side,’” Mr Turnbull said. “Those who try to demonise Muslims because of the crimes of a minority are only helping terrorists.”

But Bob Katter, the veteran Queensland political maverick and head of Mr Anning’s party, lauded the speech, declaring the contribution “absolutely magnificent” and “everything that this country should be doing”.

Anne Aly, a member of the opposition Labor Party and the first Muslim woman elected to parliament, broke into tears as she addressed the Senate. “I’m tired of fighting. I’m tired of having to stand up against hate, against vilification, time and time and time again,” she said.

Even far-right politician Pauline Hanson, who once wore a burqa on the floor of the Senate as a stunt, called the speech appalling. “We are not a racial society,” she said. “I’ve always advocated, you do not have to be white to be Australian.”

In an interview on Wednesday, Mr Anning said he had not intended to invoke Nazi language but refused to apologise for his comments. “The thought police have jumped on it,” he told Sky News Australia. “They’ve taken it completely out of context.”

He reiterated his call for a national referendum on banning Muslim migration, accusing Muslim immigrants of failing to integrate into society. “We don’t need to bring more people in this country who may cause us harm,” he said.

Australia has a long history of determining immigration policy based on race. For much of the country’s history, the White Australia policy limited non-European immigration. More recently, Australia has become a focus of migration for Muslims escaping war and economic deprivation in the Middle East, Southeast Asia and Africa.

The country has a maintained a contentious policy of offshore detention, on remote islands in the South Pacific, for migrants who try to reach Australia by boat.

The influx in immigration has strained resources and infrastructure in some cities. Critics of Muslim immigration have also pointed to several small attacks carried out recently by people who voiced support for Islamic extremism, although many of those people showed signs of mental illness.

Some members of Mr Turnbull’s own Liberal Party have been accused of demonising migrants for political gain. “Political speech sets the tone for our society and Fraser Anning’s speech flirted with inciting the most serious kind of violence against Muslims,” said Tim Soutphommasane, Australia’s race discrimination commissioner. The words “final solution”, he said, should send a “shiver up the spine”.  - New York Times