Justin Trudeau ‘does not remember’ groping reporter at festival 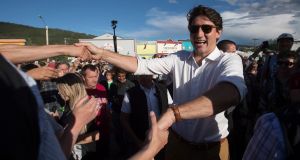 Justin Trudeau has publicly addressed allegations that he groped a reporter at an event 18 years ago, saying he does not recall any “negative interactions” taking place that day.

The allegation has dominated political discussion in recent days after it was highlighted by a blogger last month.

At the time, Mr Trudeau was a 28-year-old teacher and had been attending a music festival sponsored by a beer company in British Columbia. The festival was raising money to support avalanche safety, a cause Mr Trudeau had become involved with after his brother Michel died in an avalanche in 1998.

Days after the event, an unsigned editorial appeared in the Creston Valley Advance, a local newspaper, accusing Mr Trudeau of “groping” and “inappropriately handling” an unnamed female reporter who was covering the event.

While the editorial offered no specifics on what had happened, it claimed the woman felt “blatantly disrespected” and Mr Trudeau had apologised for his behaviour. “I’m sorry,” the editorial alleged Mr Trudeau to have said. “If I had known you were reporting for a national paper, I never would have been so forward.”

On Sunday, Mr Trudeau was asked about the allegations for the first time since becoming Canadian prime minister.

“I remember that day in Creston well,” he told reporters. “I had a good day that day. I don’t remember any negative interactions that day at all.”

The reporter behind the allegations has not responded to interview requests from the Guardian.

The then publisher of the newspaper told the Canadian Broadcasting Corporation she remembered the reporter being “distressed” after her interaction with Mr Trudeau. “My recollections of the conversation were that she came to me because she was unsettled by it,” said Valerie Bourne.

Ms Bourne believed the reporter was talking to Mr Trudeau when he touched her. “It was a brief touch,” she said. “I would not classify it or qualify it as sexual assault.”

The editorial was likely written by the reporter, Ms Bourne suggested. “She didn’t like what had happened. She wasn’t sure how she should proceed with it, because of course we’re talking somebody who was known to the Canadian community,” she said.

The paper’s then editor, Brian Bell, said he believed the reporter’s account. “I don’t recall that the reporter was coming across as having been traumatised or distraught about it, but definitely that whatever physical touch or whatever had occurred in that moment was definitely not welcome and definitely inappropriate,” he told the CBC.

“I certainly believe that it happened; this reporter was of a high character in my opinion and was professional in the way she conducted herself, and there’s no question in my mind that what was alluded to, written about in that editorial, did happen.”

Mr Trudeau’s comments on Sunday echoed a statement his office made last month that he “doesn’t think he had any negative interactions” at the music festival. – Guardian