Footage released by the Thai Navy Seals shows the moment that 12 boys and their football coach, who were lost in a cave in Thailand over a week ago, are found. Video: Thai Navy 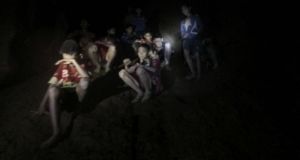 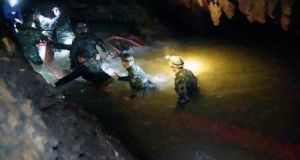 All 12 boys and their football coach who were lost in a cave in Thailand have been found alive after going missing over a week ago, a provincial governor said.

The boys, aged 11 to 16, and their 25-year-old coach disappeared when flooding trapped them after they entered Tham Luang Nang Non cave on June 23rd.

Navy divers and rescue workers entered a narrow passageway early on Monday after passing through a key chamber on Sunday whose high, murky waters had previously blocked their progress.

He said the 13 were being rescued, adding: “We found them safe. But the operation isn’t over.”

Mr Narongsak said the passageway the divers were making their way through goes upwards in some places and downwards in others and is extremely narrow, making it difficult for divers to fit through with all their gear.

They were repeatedly blocked by rising water that has filled sections of the cave and forced them to withdraw for safety reasons.

When water levels dropped on Sunday, the divers went forward with a more methodical approach, deploying a rope line and extra oxygen supplies along the way.

He said it was expected that in their condition, the boys would at first not be able to move their limbs, but medical teams would initially treat them in place. He said the diving teams included doctors.

An international search effort has gone on since the group went missing.

Aside from belongings left at the mouth of the cave and handprints on the walls, no trace of them had been found since.

Doctors said the boys could survive for days without food, but much would depend on whether they found water clean enough to drink.

The international rescue effort has gripped Thailand. Cave diving experts flew in from the UK, and 17 US air force rescue and survival specialists travelled from Japan to join the 132 Thai army, navy and police officers working day and night to try to find the group.

Prime minister Prayuth Chan-ocha thanked international experts and rescuers who helped the search. His office said he “wishes to thank the tremendous efforts of all international units that have come to assist the Thai authorities in rescuing the youth football team that was stuck in the caves in Chiang Rai. The Royal Thai Government and the Thai people are grateful for this support and co-operation, and we all wish the team a safe and speedy recovery”.

US navy Seals reached a T-junction deep into the cave, 3kms from where the boys were believed to be, on Saturday. Divers had reached the same spot earlier last week but were forced back by floodwater.

Several teams trekked into the thick jungle above the cave, desperately looking for new openings that might lead to the trapped boys. One group drilled into a 40-metre chimney that led to a muddy chamber and helicopters carrying food, water and medical supplies were dispatched to the area.

The boys, members of Moo Pa academy, reportedly knew the site well and had visited it many times before, buoying hopes that they might have trekked to a large airy chamber in the centre.

They cycled to the cave with their coach after football practice and are thought to have crawled in through a narrow 15-metre tunnel that became completely flooded due to almost non-stop heavy rain.

At Mae Sai Prasitsart school, where six of the missing boys study, special prayers were held for the junior soccer team during the morning assembly on Monday.

“I hope all the spirits that we cannot see please help us by releasing the 13 people who are our friends and our brothers,” teacher Takkapong Thammarangsi said as he led the prayers.

Pansa Namyi (15) said he shared a love of sports with his friend who was among the missing. “I want to tell him that I am waiting,” Pansa said. – Reuters