Thousands protest and EU and US object after mayoral elections annulled 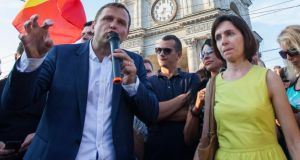 Anti-corruption campaigner Andrei Nastase, whose victory in the Chisinau mayoral election has been annulled, and head of the Action and Solidarity party Maia Sandu: travelled to Strasbourg on Monday to meet EU officials. Photograph: Dumitru Doru/EPA

Moldova’s pro-western opposition is urging the EU to impose sanctions on leaders whom they accuse of turning the country into a “dictatorship”, following the controversial annulment of mayoral election results in the capital, Chisinau.

Thousands of Moldovans have protested against the supreme court’s decision to quash anti-corruption campaigner Andrei Nastase’s victory because of alleged illegal campaigning, and the EU and US have denounced the ruling.

Mr Plahotniuc also criticised the court’s decision while insisting the government cannot interfere in legal affairs, but opponents say he and his allies are dismantling Moldova’s rule of law ahead of parliamentary elections this autumn.

“The situation is dramatic, because for the first time the results of elections have been invalidated . . . despite the fact that they were considered free and correct by national and international observers,” said Maia Sandu, head of the Action and Solidarity party and an ally of Mr Nastase.

“We have a situation of dictatorship here, where one person without any public function has managed to capture all the state institutions, and uses them to enforce his illegal decisions,” she said of Mr Plahotniuc, who has denied such claims.

Ms Sandu and Mr Nastase travelled to Strasbourg on Monday to meet EU officials, including enlargement commissioner Johannes Hahn and leaders of the European People’s Party, the centre-right bloc that includes Fine Gael.

The EU and US have strongly urged Moldova to reinstate the election results, but Ms Sandu said the country’s rulers “seem to be ignoring these statements, so there is a need for action”.

She will seek support in Strasbourg for an EU travel ban on Mr Plahotniuc and his allies, who have long deflected western criticism by portraying themselves as a pro-EU bulwark against Russian influence in ex-Soviet Moldova.

“We hope people in the West will understand the game these guys are playing . . . running our country the way the Kremlin regime of [Vladimir] Putin runs his country, while saying they are protecting Moldova from Russia, ” Ms Sandu said.

Tens of thousands of people reportedly protested in Chisinau on Sunday, and there is deep resentment towards politicians in Europe’s poorest country, which is blighted by mass emigration and the kind of large-scale corruption that cost it $1 billion in a 2014 bank fraud.

Ms Sandu – who narrowly lost a 2016 presidential election to pro-Moscow leader Igor Dodon – said an alliance between her party and Mr Nastase’s Dignity and Truth platform could win the parliamentary elections if they were free and fair.

Polls put Ms Sandu’s party in second place behind Mr Dodon’s Socialists – who want to loosen Moldova’s ties with the EU and strengthen relations with Russia.