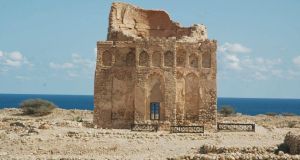 The Bibi Maryam mausoleum in the ancient city of Qalhat, Oman. Qalhat has been added to the Unesco world heritage list. Photograph: Unesco/QDP/EPA

Three new sites have been awarded world heritage status by Unesco, including a remote Kenyan settlement and an ancient city in Oman.

The 42nd session of the World Heritage Committee made the announcement on Friday afternoon following a meeting in Bahrain.

The first to be named was Thimlich Ohinga in Kenya, located northwest of the town of Migori. Unesco said the dry-stone walled settlement was probably built in the 16th-century.

It said the settlement seems to have “served as a fort for communities and livestock, but also defined social entities and relationships linked to lineage”.

“It is an exceptional example of the tradition of massive dry-stone walled enclosures, typical of the first pastoral communities in the Lake Victoria Basin, which persisted until the mid-20th-century,” it said.

It added that the settlement was the “largest and best preserved of these traditional enclosures”.

Also listed was the ancient walled city of Qalhat in Oman, located on the east coast of the sultanate.

The last to be added on Friday was the Al-Ahsa oasis in Saudi Arabia, described as “an evolving cultural landscape in the eastern Arabian peninsula”.

“They represent traces of continued human settlement in the Gulf region from the Neolithic to the present.

“With its 2.5 million date palms, it is the largest oasis in the world. Al-Ahsa is also a unique geocultural landscape and an exceptional example of human interaction with the environment.”

The committee will make decisions on whether to grant heritage site status to dozens more nominated places over the weekend. – Guardian