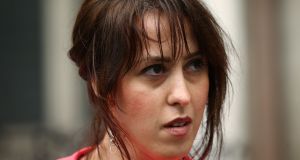 Alina Dulgheriu, of the Be Here For Me campaign, who argued the protest ban was an unlawful interference with protesters’ rights including the right to freedom of expression. Photograph: Yui Mok/PA Wire

Campaigners have lost a London High Court bid to challenge a council’s ban on demonstrations outside an abortion clinic in the city.

Ealing Council was the first in Britain to create a 100-metre protest-free “buffer zone” outside a Marie Stopes clinic in the west London borough following protests.

Alina Dulgheriu, of the Be Here For Me campaign, and Andrea Orthova, another anti-abortion campaigner, argued the ban was an unlawful interference with the protesters’ rights under the European Convention on Human Rights — including the right to freedom of expression.

But their case was dismissed on Monday by Mr Justice Turner, who found the ban does interfere with activists’ rights but said the council was “entitled” to conclude it was a “necessary step in a democratic society”.

The judge added: “There was substantial evidence that a very considerable number of users of the clinic reasonably felt that their privacy was being very seriously invaded at a time and place when they were most vulnerable and sensitive to uninvited attention.

“It also follows that, in this regard, I am also satisfied that the defendant (council) was entitled to conclude that the effect of the activities of the protesters was likely to make such activities unreasonable and justified the restrictions imposed.”

The public spaces protection order (PSPO) came into force in April after reports of “intimidation, harassment and distress” for women using the facility on Mattock Lane.

Clinical operations manager John Hansen-Brevetti said women had been told that the ghost of their foetus would haunt them, had been told “mummy, mummy, don’t kill me”, had holy water thrown on them and rosary beads thrust at them.

Ms Dulgheriu (34) said she was offered financial, practical and moral help, as well as accommodation, and now had a “beautiful” six-year-old daughter.

In a statement following the ruling, she said she was looking into options to challenge the judge’s decision.

She added: “I am saddened and shocked that the court has upheld a PSPO that prevents good people giving help to mothers who desperately want it.

“I am devastated for those women that, since the introduction of the Ealing PSPO, have not been able to access the loving help that I did.

“I feel desperately sorry for the vigil members who since the move to create this PSPO have been consistently subject to abuse on the street and slander online.”

The judge said his ruling did not give the “green light” to local authorities to impose PSPOs around abortion clinics and that each case must be decided on its own facts.

Ealing Council leader Julian Bell said: “We are delighted that Mr Justice Turner has emphatically upheld our PSPO at Mattock Lane in full with no parts quashed.

“This sends a clear message to those that have denied that there is evidence of unacceptable behaviour having a detrimental impact on people in this area, that there was a problem and action needed to be taken.

“The harassment and intimidation of local residents and those accessing legally available medical services was totally unacceptable and ‘the feelings of intrusion’ was clearly having a negative impact.

“Since the safe zone was implemented in April, we have seen a dramatic reduction in anti-social behaviour, confirming to us that we were right to take this action in the interest of those people living in the locality of Mattock Lane, and for those who visit the area.” - PA