Mexico's leftist Andres Manuel Lopez Obrador said he will seek reconciliation among all Mexicans, while vowing not to confiscate property, after a landslide presidential election victory. Video: Reuters 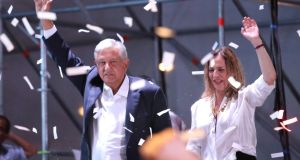 Mexico’s next president, Andrés Manuel López Obrador, said on Monday he will seek to remain in Nafta along with the United States and Canada and that he respects the existing Mexican team renegotiating the trade pact.

Mr López Obrador won a landslide election victory on Sunday, getting more than double the votes of his nearest rival, dealing a resounding blow to establishment parties and becoming the first leftist to win the Mexican presidency since one-party rule ended in 2000.

“We are going to accompany the current government in this negotiation, we are going to be very respectful, and we are going to support the signing of the agreement,” he told Milenio TV in an telephone interview, saying the aim was a deal on the North Atlantic Free Trade Agreement that was good for Mexico.

He also said he would pursue a frank dialogue and friendly relations with the United States.

Mr López Obrador, who will take office in December, said he would discuss Nafta with President Enrique Peña Nieto in their first meeting after the election, which is set for Tuesday.

US president Donald Trump has been openly antagonistic to Mexico over trade and migration since his own presidential campaign. The current Nafta talks began last year after Mr Trump called for the agreement to be renegotiated to better serve US interests.

Although Mr Trump congratulated Mr López Obrador in a Twitter message on Sunday night, a White House aide then reiterated one of the US leader’s most controversial campaign promises. “In the case of Mexico, obviously we share a border with them [and] this president has made very clear about building that wall and having Mexico pay for it,” Kellyanne Conway said on Fox News.

Mexican politicians across the political spectrum have long said that Mexico will not pay for Mr Trump’s proposed wall along the southern US border.

Mr López Obrador has said he wants to make Mexico more economically independent of the United States. At the same time, he also hopes to persuade Mr Trump to help develop Mexico and Central America in order to contain illegal migration.

Mr López Obrador won the biggest share of the vote in a Mexican presidential election since the early 1980s, giving him a strong mandate both to address the country’s domestic problems and to face external challenges like the threat of a trade war with the United States.

In his victory speech and in comments to local TV networks, Mr López Obrador sought to assure investors he would pursue prudent economic policies and the independence of the central bank. His economic advisers repeated this message in a call on Monday with investors.

Exit polls showed Mr López Obrador MORENA party could win the first outright majority in Congress in over 20 years. Pollsters’ early estimates suggested the party was close to winning the lower house but farther away in the Senate. – Reuters