Thousands in US have protested against president’s family separations policy 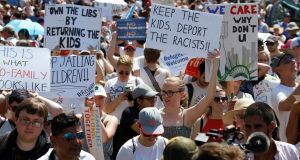 Immigration activists hold up signs during rally to protest against the Trump administration’s immigration policy outside the White House in Washingtonon Saturday. Photograph: Joshua Roberts/Reuters

After a day of mass demonstrations against Donald Trump’s family separations policy and calls by prominent Democrats to abolish the federal Immigration and Customs Enforcement agency, or Ice, the president dared Democrats to pursue the issue in the run-up to midterm elections in November.

“All it’s going to do is lead to massive, massive crime,” Trump said in an interview with Fox Business that aired on Sunday. “That’s going to be their [Democrats] platform, open borders which equals crime.

“I think they’ll never win another election. So I’m actually quite happy about it.”

Trump taunted Democrats as part of a broader defence of his immigration policies, which thousands of Americans protested on Saturday in hundreds of rallies across the country.

More than 2,300 undocumented children were separated from their families under Trump’s “zero tolerance” policy, according to government figures. The majority remain apart from their parents. The administration said on Friday it would no longer “separate families but detain families together during the pendency of immigration proceedings”.

At a rally in Boston, Democratic senator Elizabeth Warren called for the abolition of Ice, taking up similar calls from other 2020 presidential prospects including senators Kirsten Gillibrand and Kamala Harris.

“The president’s deeply immoral actions have made it obvious we need to rebuild our immigration system from top to bottom starting by replacing Ice with something that reflects our morality and that works,” Warren said.

Alexandria Ocasio-Cortez, the 28-year-old leftwinger who rose to national attention after shocking senior House Democrat Joe Crowley in a primary in New York, campaigned on a platform that included the abolition of Ice.

While Trump equates the proposal with punting on border security, Democrats argue that security would be strengthened by breaking Ice apart along the existing fault line separating its investigative arm from its enforcement arm.

Nineteen senior Ice officials recommended such a split in a letter on Friday to homeland security secretary Kirstjen Nielsen.

The letter informed the Trump administration that stepped-up enforcement against families seeking asylum in the US had detracted from the fight against violent criminal elements. Customs and Border Protection agents, not Ice agents, police the borders.

Calls for the abolition of Ice are not yet widespread among Democrats. Senator Richard Blumenthal of Connecticut told CBS’s Face the Nation on Sunday “abolishing Ice will accomplish nothing unless we change the Trump policies”.

“I visited the border about a week ago,” Blumenthal said. “I saw the brutality, and inhumanity and absolute cruelty of these policies, ripping children away from their parents.

“There is no plan or path to reunify them. It is not happening and the Trump administration is embarked on a trainwreck: a moral trainwreck, a legal trainwreck and a humanitarian trainwreck.”

In his Fox interview, which was prerecorded, Trump repeated a claim he tweeted on Saturday, that Ice had “liberated” towns from the MS-13 gang, which Trump nearly always invokes in discussions of immigration despite the gang’s irrelevance to the core debate.

Trump has repeatedly used the word “liberate” to describe Ice efforts in which arrests have been made. He exaggerates: no American town is ruled by the MS-13 gang.