Journeying to the historic heart of the Yazidi religion 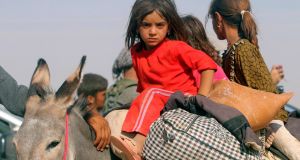 We’re driving to Lalish, a small village in the Shekhan Valley of Iraqi Kurdistan and the holiest place in the Yazidi faith, a religion that has been so misunderstood down the ages that it has been likened to devil worship.

This misconception has contributed to its people being persecuted for centuries. Most recently, in 2014, the Islamic State (Isis) terror group murdered thousands of Yazidis in a genocide. Many of those who fled sought refuge near Lalish.

Once we reach the highway, I begin to realise it isn’t Isis I need to worry about. My driver, Dilovan, is flying and, while there are lanes marked on the road, they are largely ignored and cars routinely veer into oncoming traffic to overtake.

At one stage, a car merges from another lane and begins sliding towards us on my side. It’s just inches away when Dilovan beeps and it moves off. He says something I don’t understand and laughs. I laugh back, but only out of politeness.

Soon the busy roads are left behind and replaced with yellow rolling hills. There are oil fields along the way and flares can be seen burning on 100ft masts in the distance, a reminder of why this region has been the subject of such quarrel.

Lalish itself is almost hidden, nestled in the mountains up a small road guarded by local militia. As we approach, there is a checkpoint. Normally, I’m told, one is waved through, but this time the soldier leans in the driver’s window and looks me over.

Dilovan speaks only a word or two of English and I speak neither Arabic nor Kurdish so there’s virtually no verbal communication between us.

He and the soldier are conversing and I can tell it’s about me because the soldier keeps glancing over at me as they talk. Eventually he smiles at me and I smile back hopefully. He beckons us to continue with a nod of his head.

The heat is stifling so I’m wearing shorts, but I really should have known better. I’m told at the entrance to Lalish that they’re not permitted. Fortunately, the soldiers have a spare pair of pants that I can throw on over my shorts. They’re extremely baggy but I’m grateful for the hospitality despite the laughter.

There are also no shoes or socks permitted in the village, which is really more of a complex of passageways, temples and courtyards. The ground is piping hot underfoot but there is some shade from mangled trees that grow from under the slabs of stone.

Lalish is about 4,000 years old and home to the tomb of Sheikh Adi Ibn Musafir, a central figure and the focal point for the Yazidi religion. The Yazidis also believe that Lalish is where Noah’s Ark came to rest after the great flood.

Walking through the complex, I’m told I should step over rather than on the thresholds of doorways, as angels are believed to rest there.

Attached to the chamber of Sheikh Adi’s tomb is the cave of the wishing rock, where children are throwing cloths. The belief is that the wishes of those who successfully land their cloth on the rock will come true.

Those living in Lalish do so in cramped and basic stone structures. A woman is hanging her washing on a clothesline, which looks distinctly odd in a place like this. Gangs of children roam around. “Where are you from?” asks one in a Star Wars T-shirt.

About 50km south of Lalish is Mosul, but it isn’t possible to travel there without an Iraqi visa, which is almost impossible to get. Some say this is because the government is resentful of how its citizens are treated by other states.

A similar distance to the north is Dohuk, a bustling city with high-rise tower blocks standing against a backdrop of the Shandukha and Spi mountain chains; the city lies between the two.

It is home to approximately 300,000 mostly Kurdish inhabitants, and while there are few bars in which to watch the World Cup – this being a predominantly Islamic nation – we find one in the city’s Christian quarter.

It’s a dingy spot and rarely more than half-full. A drunken man wanders in each evening and babbles for a few moments to whoever is unfortunate enough to catch his eye before he heads off into the night again.

Eateries here are not known for their ambience. One, called Acre, is brightly lit and full of people. We order falafel but before it’s even served, the table is covered with other dishes of sauces, olives, hummus, salads and vegetables.

Afterwards, out front, there are rows of istikan glasses filled with sugary tea on a table that people pick up and drink from as they smoke cigarettes.

It’s notable that no matter where you travel through Iraqi Kurdistan, there are Kurdish flags everywhere, as if to serve as constant reminders of the region’s thirst for independence.

Some 93 per cent of people in Iraqi Kurdistan voted for autonomy in an unauthorised referendum last year. The authorities in Baghdad were furious and, in response, imposed an international flight ban on airports in the region.

The ban was recently lifted, but, for the Kurds, the fight for their coveted independent state continues.