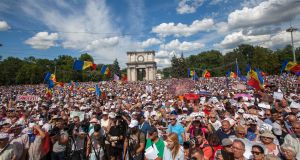 Citizens protest in Great National Assembly Square, in front of the Arch of Triumph, after the invalidation of the second round of mayoral elections in Chisinau, Moldova, on Monday. Photograph: Dumitru Doru/EPA

Moldovans have taken to the streets after anti-corruption campaigner Andrei Nastase was barred from becoming mayor of their capital, Chisinau, due to court decisions that have deepened western fears for democracy and the rule of law in Europe’s poorest country.

Mr Nastase’s run-off victory on June 3rd was annulled due to allegations of irregularities, which were upheld by judges whom critics believe are controlled by Moldova’s scandal-plagued political elite.

Thousands of people have protested in recent days to support Mr Nastase and denounce an apparent carve-up of power between Moldova’s ruling party chief Vlad Plahotniuc and the nation’s president Igor Dodon.

Mr Plahotniuc’s Democratic Party (DPM) says it wants Moldova to join the EU while Mr Dodon backs closer ties with Russia, but both are linchpins of a political establishment that has allowed graft and cronyism to flourish, while ordinary Moldovans struggle on an average salary of €300 and many seek work abroad.

Hundreds of people rallied outside city hall in Chisinau on Tuesday, chanting “Shame!” and “Down with the mafia!”

“We are continuing our protest...because city hall belongs to the people. It is not Plahotniuc’s and never will be,” Mr Nastase, an ex-prosecutor, told the crowd alongside his ally Maia Sandu, a former education minister.

“From today we are officially in a dictatorship,” Ms Sandu said, denouncing the supreme court’s decision on Monday.

“This is the first day of our resistance...If until now our aim was to have the election results recognised, now we have another very important aim – to escape from this dictatorship.”

The supreme court found that both Mr Nastase and Socialist opponent Ion Ceban broke election rules by campaigning via social media on voting day; they deny wrongdoing and insist they only urged people to cast their ballots.

Protesters believe the judges were swayed by powerful politicians who do not want Mr Nastase to be Chisinau’s mayor during parliamentary elections this autumn, when his Dignity and Truth Platform and Ms Sandu’s Action and Solidarity Party will jointly challenge Mr Plahotniuc’s DPM and Mr Dodon’s Socialists.

Moldova’s top politicians deny meddling in court cases, but the mayoral dispute has refocused attention on how they run a graft-ridden country pulled between Russia and the West, which lost $1 billion in a massive 2014 bank fraud.

US secretary of state Mike Pompeo told Moldovan prime minister Pavel Filip in Washington on Monday that “free and fair elections are a hallmark of a democratic government and must reflect the will of the country’s citizens without political interference.”

They met as the US embassy in Chisinau lamented a Moldovan supreme court ruling that “reinforced the public’s perception of political interference in the judiciary”.

Meanwhile Peter Michalko, the EU envoy to Chisinau, said he was “extremely disappointed by the decision” of the court.

“The will of the people expressed in free and fair elections , democratic values, principles of rule of law to which the Republic of Moldova committed in its relations with the EU, have not been respected,” he added.