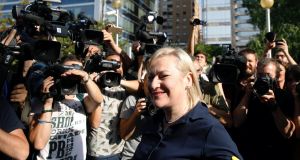 Ines Madrigal, who alleges she was one of Spain’s “stolen babies” and has taken former doctor Eduardo Vela to court for falsifying her birth certificate to give her to her adoptive mother, outside court in Madrid on Tuesday. Photograph: Juan Medina/Reuters

An 85-year-old Spanish gynaecologist went on trial on Tuesday accused of abducting a baby in 1969 and giving her away, the first person prosecuted for the “stolen babies” scandal that affected thousands during General Francisco Franco’s rule.

Activists wearing yellow t-shirts and chanting “We want justice!” protested outside the Madrid court demanding the re-opening of other cases, many dating back to the right-wing dictatorship of 1939 to 1975.

Campaigners say officials took babies from “unsuitable” mothers – often communists or leftists – and gave them to families connected to the regime. They say it continued after Franco’s death into the 1980s.

Eduardo Vela is accused of falsifying documents, abducting a child under seven years and certifying a non-existent birth while he worked at the San Ramon hospital in Madrid, now closed. He denies any wrongdoing.

Bringing the charge is Ines Madrigal, who accuses Dr Vela of forging her 1969 birth certificate to show her adoptive mother, now dead, as her biological parent.

Ms Madrigal, who was told by her mother at 18 that she was adopted, became suspicious about her background after reading a newspaper article about stolen babies around eight years ago, she told Reuters Television. “It made the hair on my arms stand up like spikes,” she said.

Dr Vela, who is frail and struggled to hear the questions put to him in court, denied handing over the baby, and denied that the signature on Ms Madrigal’s birth certificate was his. “I never gave any baby to anyone,” he said.

A decade ago, Spanish judge Baltasar Garzon recorded the cases of about 30,000 Spanish children taken at birth during Franco’s rule. Mr Garzon was barred from the bench in 2012 for illegal wiretapping and no longer practises as a judge in Spain.

The cases echo events that took place during the 1976-1983 military dictatorship in Argentina – where courts have since handed out lengthy jail terms for the systematic theft of babies from political prisoners.

Activists say hundreds of similar cases have failed to make it to court in Spain because of a lack of evidence or because the time limit to file a charge has passed. – Reuters