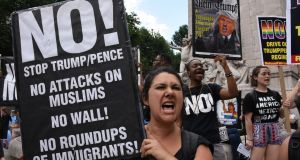 Donald Trump ordered his first travel ban just a week after taking office in January 2017, prompting widespread chaos and protests at airports and in cities across the US. File photograph: Timothy A Clary/AFP/Getty Images

President Donald Trump hailed a decision by the US supreme court on Tuesday to uphold his controversial travel ban, claiming a “vindication” of his immigration policy.

In a ruling with profound implications for the scope of a president’s power over immigration policy, the court ruled by five to four to uphold the president’s ban on immigrants from certain Muslim-majority countries.

The court was considering the third iteration of Mr Trump’s contentious ban, which was first unveiled weeks after his election, sparking protests. The version of the travel ban being considered by the court was a proclamation issued by the president last autumn.

Lower courts had deemed the ban unconstitutional, but the supreme court ruled on Tuesday that it fell within the scope of presidential authority, bringing to the end more than a year of legal battles.

In the court’s opinion, written by chief justice John Roberts,* the president’s proclamation was “neutral and justified by national security concerns”. Its purpose was to prevent entry of nationals who could not be adequately vetted – a “legitimate purpose,” according to the court.

While the lower courts had highlighted Mr Trump’s previous comments about Muslims during the presidential campaign, the supreme court’s majority opinion noted that “the text says nothing about religion”.

Justice Sonia Sotomayor, one of the four dissenting judges, delivered a lengthy dissent of the decision by the court, accusing the majority of upholding an “openly discriminatory policy”.

Mr Trump welcomed the decision as a “tremendous victory for the American people and the Constitution”.

“In this era of worldwide terrorism and extremist movements bent on harming innocent civilians, we must properly vet those coming into our country,” he said in a statement issued by the White House. “This ruling is also a moment of profound vindication following months of hysterical commentary from the media and Democratic politicians who refuse to do what it takes to secure our border and our country.”

He had initally responded to the court decision with a tweet: “SUPREME COURT UPHOLDS TRUMP TRAVEL BAN. Wow!”

Sitting alongside senior Republican House members and senators at a pre-scheduelled meeting later in the White House, Mr Trump repeated his view that the ruling was a “tremendous victory”.

Mr Trump, who said he was seeking additional funding from lawmakers for his Mexican border wall, again dismissed calls from some Republicans for more immigration judges to help solve the legal confusion and case backlog at the Mexican border.

“Everyone is being made a judge. It’s crazy. In other countries it’s called – ‘I’m sorry, you can’t come in,’” he said.

Tuesday’s long-awaited supreme court judgment was delivered in the midst of a nationwide debate about immigration, following national and international outrage over a policy of separating children from their parents who cross the border into the United States illegally.

The Department of Homeland Security, which has been the face of the chaos at the border, welcomed the court’s ruling in a statement. “While we have the most generous immigration system in the world, it has repeatedly been exploited by terrorists and other malicious actors who seek to do us harm,” a spokesman said.

Senate majority leader Mitch McConnell also appeared to take credit for the ruling, tweeting a picture of himself and newly-appointed supreme court judge Neil Gorsuch. Mr McConnell and Senate Republicans blocked the appointment of a replacement on the court for Anthony Scalia, who died during Barack Obama’s presidency. Instead they confirmed the nomination of conservative judge Gorsuch after Trump was elected.

*This article was amended on Wednesday, June 27th, to correct a factual error