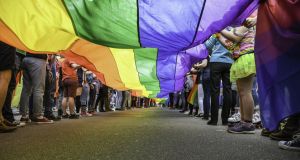 Amnesty International: ‘This action plan is an opportunity for her to prove her LGBT credentials and we urge her to act.’ Photograph: iStock

The British government will next week publish an action plan on advancing the lives and rights of lesbian, gay, bisexual and transgender (LGBT) people in the UK.

It comes after the largest survey anywhere in the world of their experiences was carried out.

British prime minister Theresa May told cabinet that the findings of the survey, in which more than 108,000 LGBT people participated, showed that there was “more to do” to ensure the UK is a country where “no-one feels the need to hide who they are”.

The survey was presented to cabinet as campaigners called on Ms May to compensate up to 20,000 gay men who were convicted over sexual behaviour which is no longer a crime.

Rachel Barnes, whose great-uncle was granted a posthumous pardon in 2013 for his prosecution for homosexual acts in the 1950s, said she was sure Turing would want other gay men to receive compensation for their suffering.

“No money can ever reverse lost and damaged lives but as a symbolic gesture compensation is important and the right thing to do.”

Former Royal Fusilier Stephen Close, who was convicted of consenting sex with another soldier at the age of 20 in 1983, was also among those handing in the letter.

Homosexuality was decriminalised in England and Wales in 1967 but remained an offence while serving with the armed forces until 1991.

Around 100,000 men were convicted of consenting adult same-sex behaviour following the outlawing in 1885 of all homosexual acts; with at least 15,000 of these men being convicted after the Sexual Offences Act was legislated in 1967.

Mr Close said: “I was sentenced to six months in a military prison. I lost my job, home, income and pension.

“My homosexual conviction and ‘discharge with disgrace’ made it very difficult to get another job.

“I was near unemployable and was forced to do mediocre, low-paid jobs for three decades.

“It caused me severe depression and ruined my life.”

Ms May told senior ministers that the UK could be “proud” of being “a world leader in advancing LGBT rights” and had achieved “significant progress” over recent years, said the PM’s official spokesman. But she added: “The survey results show we have more to do to improve the lives of LGBT people and make this a country where no-one feels they need to hide who they are.”

Mr Tatchell said an estimated 10-20,000 homosexual men still alive in the UK deserve an apology and compensation for convictions under anti-gay laws which have since been repealed.

Amnesty International’s director for Northern Ireland, Patrick Corrigan, urged Ms May to use the action plan to end marriage inequality in the North.

“Theresa May has stated this action plan will make the UK a country ‘where no-one feels the need to hide who they are or who they love’.

“This action plan is an opportunity for her to prove her LGBT credentials and we urge her to act.”–PA