There is a $250m shortfall, largely because the US has cut the amount of aid it provides 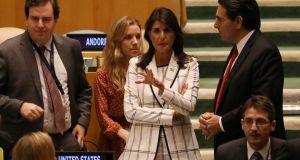 The UN agency that helps the 5.4 million Palestinians classified as refugees could start running out of money next month because of a $250 million (€213m) shortfall, largely because of American aid cuts, its top official said on Monday.

The official, Pierre Krähenbühl, commissioner general of the UN Relief and Works Agency, said the financial crisis was the worst the agency had faced since its creation in 1949, after the founding of the state of Israel.

The most immediate threat, he said, is funding for emergency food aid to indigent Palestinians in the Gaza Strip and Syria.

A delay in the late-summer opening of schools run by the agency, which serve more than a half-million Palestinian students, also is possible, he said.

Mr Krähenbühl spoke in an interview at his agency’s offices in New York ahead of an emergency fundraising conference at the United Nations.

Most of the roughly $1.2 billion in annual spending by the agency, known by its acronym, UNRWA, comes from voluntary contributions by the 193 member states of the United Nations.

“While we have survived in a sense for the first half of the year with $250 million still missing,” Mr Krähenbühl said, “we are going to run out of money for food distribution in Gaza, for psychosocial support in the Gaza Strip and also cash for work programs in the West Bank and others in a matter of weeks.”

By the beginning of July, he said, “I am going to have to make some very significant decisions depending on how much money we will receive by then in additional funding, and we don’t have enough money currently committed to be sure that we can open the school year toward the end of August or September.”

The United States historically has been one of the biggest donors to UNRWA, widely regarded as a lifeline to many Palestinians classified as refugees in Gaza, East Jerusalem, the occupied West Bank, Jordan, Lebanon and Syria.

But this year the Trump administration significantly reduced its contribution, to about $125 million from more than $300 million in 2017. About half of the 2018 amount is still withheld.

Trump administration officials said any restoration of aid was partly dependent on structural changes at the agency to make it more efficient and accountable. They also said other countries should pick up more of the financial burden. Critics of the aid reduction accused the administration of retaliation for Palestinian anger over its decisions that favor Israel in the protracted Israeli-Palestinian dispute, notably the recognition in December of Jerusalem as Israel’s capital.

Trump administration officials have rejected accusations that the aid cut was tied to politics.

Mr Krähenbühl said agency officials had maintained open channels of communication with the Trump administration in hopes of changing its decision, with contacts that included Nikki R. Haley, the US ambassador to the United Nations, and Jared Kushner, Mr Trump’s son-in-law and adviser on the Middle East, who is on a visit to the region.

“I have not received any indication that the decision would change this year,” Mr Krähenbühl said. Israel, which welcomed the US decision to cut UNRWA aid, has long criticized the agency, accusing it of anti-Israel bias and of perpetuating Palestinian dependence, claims that agency officials have rebutted.

But Israeli officials also have acknowledged UNRWA’s importance as a force for stability, since it provides education, health care and food aid to Palestinians.

Mr Krähenbühl said other countries had stepped up since the Americans announced the aid reduction in January, most notably Saudi Arabia, the United Arab Emirates and Qatar, which each contributed $50 million in emergency funds.

“What I do expect is that member states will signal their readiness to either provide additional money now or at later stage during the year,” he said. US officials have not said precisely what they would want to see in any UNRWA restructuring, but they have criticized what they called a chronic need by the agency for more money.

“I think what they need to do is determine a way to better manage its budgeting and its finances,” Heather Nauert, a State Department spokeswoman, said last week.

“And that’s something ? a concern that not just the United States has expressed, but other countries have expressed that concern as well.” - New York Times

1 ‘IRA has gone away’: McDonald responds to Garda Commissioner’s comments
2 Drug dealer loses codes for €53.6m bitcoin accounts
3 Courts Service gets orders over social media postings about elderly woman
4 More than 25 people to sue over circulation of images taken at Dublin Garda station
5 Varadkar says any Fine Gael deal would have to recognise strength of its vote
Real news has value SUBSCRIBE