Farc party faces a drubbing in its first Colombian election 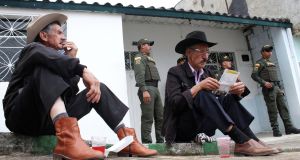 Followers of the political party Farc during the closing of their election campaign, in Fusagasugá, Colombia. Photograph: Felipe Caicedo/Reuters

The former guerrilla movement Farc faces a drubbing on Sunday in its first electoral contest since it transformed itself into a political party following a peace agreement in 2016.

Still campaigning as Farc, with its Spanish acronym now standing for the Common Alternative Revolutionary Force, many of the group’s former commanders will face an electorate it once terrified and which is resentful they are not in jail for human rights abuses and drug-trafficking.

The movement is projected to need at least 400,000 votes from an electorate of 36 million in order to have a chance of winning any of the 102 seats in the senate and 166 in the lower house of representatives up for grabs in the election. But polls show the group’s support struggling to break 1 per cent, with some surveys predicting it will do well to top 100,000 votes. That would leave it with just the five seats in each chamber of congress that the peace deal guarantees it until 2026.

Farc had previously temporarily suspended its election campaign, saying its candidates were the target of right-wing elements determined to block its entry into electoral politics.

Colombia’s public defender’s office has said that at least 22 community leaders and human rights campaigners have been murdered so far this year in what is a growing wave of right-wing violence since the government of president Juan Manuel Santos signed the peace accord with Farc, bringing a half-century of conflict between the two sides to an end.

The former guerrillas have concentrated their campaign efforts in rural areas that have long been neglected by central government and which are traditionally underrepresented by Colombia’s notoriously unreliable polling organisations.

Sunday’s election will be held just days after the Farc leadership announced it was abandoning the presidential contest due to be held in May, after its leader and candidate Rodrigo Londoño Echeverri successfully underwent open heart surgery.

In announcing its decision not to replace him, the party reiterated its commitment to dialogue “to make a reality the perspective of a great national convergence”.

The congressional elections are seen as key to shaping the presidential contest, as as well as selecting a new congress they will act as an open primary as movements on the left and right of the political spectrum jockey for position ahead of the May vote.

Senator Iván Duque is the frontrunner to become the presidential candidate of the leading conservative coalition, even though his party leader and mentor, former president Álvaro Uribe, is facing an estimated 300 investigations.

Álvaro’s brother Santiago Uribe is also on trial for his alleged role in founding an illegal right-wing paramilitary group linked to dozens of murders.

Both the senator and former president are harsh critics of the peace agreement with Farc.

The main threat to Mr Duque’s chances of securing the nomination is from supporters of president Santos. He fell out with Mr Uribe, his predecessor, which could see his dwindling number of followers voting for two of Mr Duque’s more moderate opponents in the right-wing primary in order to deliver a blow to Mr Uribe’s hopes of returning to power.

The contest to become the candidate of the main left-wing alliance is expected to be won by former mayor of Bogotá Gustavo Petro.

Himself once a guerrilla of a movement that demobilised in the 1980s, Mr Petro has emerged as a surprise early frontrunner in the presidential election, which has resulted in a vicious smear campaign being waged against him on social media.