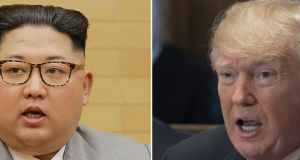 US president Donald Trump has agreed to meet North Korean leader Kim Jong-un, in a major breakthrough in relations between the two nuclear powers.

While the South Korean official said the president would meet the North Korean leader by May, the White House said the time and place was yet to be determined.

A delegation from South Korea flew to Washington following a summit between North Korea and South Korea this week. An invitation letter from the North Korean leadership to the US president was presented via the South Korean conduit.

Speaking at a hastily-arranged press conference at the White House, South Korea’s national security adviser Chung Eui-yong, said that North Korea was prepared to consider denuclearisation. He said that Kim Jong-un had “expressed his eagerness to meet President Trump as soon as possible,” adding that “President Trump said he would meet Kim Jong-un by May to achieve permanent denuclearisation” though he did not give further details of where a possible meeting would take place.

In a statement, White House press secretary Sarah Sanders said: “President Trump greatly appreciates the nice words of the South Korean delegation and President Moon. He will accept the invitation to meet with Kim Jong-un at a place and time to be determined. We look forward to the denuclearisation of North Korea.”

She added: “In the meantime, all sanctions and maximum pressure must remain.”

Relations between the two countries reached a historic low last year after Pyongyang fired several intercontinental ballistic missiles and tested what was widely believed to have been a hydrogen bomb. Mr Trump also engaged in a war of words with the North Korean leader via twitter, branding him “little rocket man”.

Mr Trump confirmed that plans for a meeting were underway. “Kim Jong Un talked about denuclearization with the South Korean Representatives, not just a freeze. Also, no missile testing by North Korea during this period of time,” he tweeted. “Great progress being made but sanctions will remain until an agreement is reached. Meeting being planned!”

But hopes of a detente have emerged in recent weeks following the Winter Olympics in South Korea which was attended by a delegation from North Korea, including the sister of Kim Jong-un.

Mr Chung, who led the South Korea negotiations with North Korea this week, praised Mr Trump’s leadership, crediting the US leader with bringing about the historic offer.

The international community has increased sanctions on North Korea over the past year as the country’s nuclear activity has intensified, sparking particular concern among residents of Japan, South Korea and the United States’ pacific territories.

Republicans gave a cautious welcome to the announcement. “While we must be cautious, announcement on Korea is historic,” Republican Congressman Pete King tweeted. “Kim Jong Un agrees to suspend nuclear tests while US continues military maneuvers on Peninsula; agrees to meet w @POTUS; gives S. Korea status by having them deliver message. Must be cautious but very positive for US.”

Others were more sceptical. “A Trump-Kim summit is a major diplomatic gamble,” tweeted Richard Fontaine, president of the Center for New American Security. “But let’s see if it actually comes off. Recall that yesterday, we were set to impose steel tariffs on Canada.”