How the Irish were complicit in Native American suffering 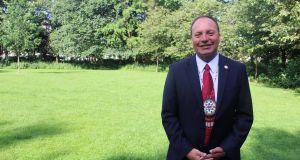 Choctaw Nation chief Gary Batton during a visit to Dublin in June 2017.

As the annual St Patrick’s Day celebrations in the United States get under way this week, this year’s customary visit by the Taoiseach will include a different dimension.

On Monday, Leo Varadkar will travel to Durant, Oklahoma, to visit the Choctaw Native American tribe. His trip builds on last year’s visit to Midleton, Co Cork, by a delegation from Oklahoma led by the tribe’s chief, Gary Batton, to witness the designation of a sculpture commissioned to mark an extraordinary act of kindness by the Native American community.

In 1847, at the height of the Great Famine, the Choctaw community sent $170 to Ireland to help the poor and the starving. This was despite their own precarious position, having been removed from their land to west of the Mississippi river to facilitate the expansion of white America westward.

It won’t be the first visit to the tribe by an Irish representative. In 1995, president Mary Robinson visited the Choctaw Nation in Oklahoma and was made an honorary chief.

Varadkar’s visit serves as a reminder of the plight of America’s indigenous inhabitants, at a time of heightened awareness in the US about the challenges facing immigrants and non-white Americans.

The treatment of America’s native population is one of the great stains on the history of Western colonialism. The reality of conquest has been cloaked in national myths that have been perpetuated through modern American history.

This includes the story of the origins of Thanksgiving, a national holiday which allegedly marks the moment when the early Pilgrims broke bread with the Wampanoag tribe . Or the tale of Pocahontas, the daughter of a native chief, who converted to Christianity and married an English settler in Jamestown, Virginia, in the early 17th-century, taking the name Rebecca. Her tale, which was depicted in a Disney film, is also captured in a huge watercolour of her baptism which hangs in the US Capitol building.

The reality is very different. While many Native Americans were wiped out by Western diseases following their early encounters with European explorers after Columbus, it was during the 19th-century that the wholescale displacement of a race of people accelerated.

In 1830, president Andrew Jackson signed the Indian Removal Act. Native American tribes were forced to leave the southeast of the country and move to specially designated areas west of the Mississippi. They mostly made the journey by foot, a crossing that became known as the “Trail of Tears”, with many settling in modern-day Oklahoma.

Throughout the following decades the push west continued, as officials in Washington attempted to negotiate with the tribal communities through various “peace commissions” and treaties.

But violence underpinned this displacement of the Native American population, as was captured in the 1970 bestselling book by Dee Brown, Bury My Heart at Wounded Knee, one of the first works to tell the history of Native Americans from the perspective of the vanquished rather than that of the victors.

The book depicts the brutality at the heart of the project, such as the mass hanging of the Santee Sioux tribe in Minnesota in 1862, the largest mass hanging in American history, and the Sand Creek Massacre two years later, which saw Southern Cheyenne and Arapaho Indians in Colorado killed by Union soldiers during the American civil war.

Many Irish form part of this story – and not always in positive ways. Patrick Edward Connor from Co Kerry, a Union general during the civil war, played a central role in the assault on the Native American community. He masterminded the infamous Bear River Massacre of 1863, when hundreds of Shoshone villagers were killed in retaliation for a series of raids by the tribe.

General Philip Sheridan, whose parents had emigrated to the US from Co Cavan, led attacks against the Cheyenne, Kiowa and Comanche tribes across the Great Plains. He is widely credited with coining the phrase: “The only good Indians I ever saw were dead,” though he denied making the comment.

Irish connections also reportedly spurred the Choctaw Indians farther south to donate to the Irish Famine victims. It was reportedly through an Irish soldier who was implementing the government’s mass displacement policy that the tribe heard of the famine devastating Ireland.

Today, the Choctaw tribe is the third-largest in the US. A federally-recognised entity, it runs its own housing and education programmes, as well as a TV channel, from its base in Oklahoma.

Like many of the remaining tribes, the Choctaw community now enjoys the recognition it was once denied by American society. But the troubled history of the indigenous community offers a salutary reminder of how the history of America is one of conquest as much as immigration.