Pilot in fatal helicopter crash had option to turn back, investigators say 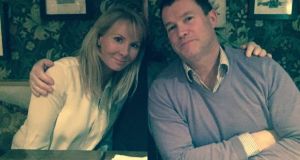 A helicopter crash in which five family members were killed happened after the pilot failed to turn around when entering low cloud, accident investigators said.

Three brothers and two of their wives died in the crash in mountains in Snowdonia, North Wales, on March 29 last year.

Pilot Kevin Burke, 56 and his wife Ruth, 49, were among the victims.

The five, from a wealthy Anglo-Irish family, lived in the Milton Keynes area and were on their way to Dublin for a party following the confirmation of another young relative.

The Air Accidents Investigation Branch (AAIB) found that the pilot “had the option to turn back, divert or land” when he entered an area of poor visibility.

“Having entered cloud, there appears to have been no attempt to turn back,” according to the report.

The privately owned Twin Squirrel aircraft struck the side of Rhinog Fawr Mountain at an altitude of 2,000 feet.

A system which alerts pilots when they are approaching high terrain is available for the GPS equipment used by the helicopter, but it was not fitted.

“There was no other means of warning the pilot of the rising ground,” accident investigators concluded.

The bodies of the victims were found with the wreckage near Trawsfynydd. – PA