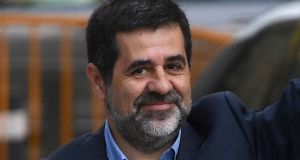 Jordi Sanchez, who has been in prison since September, awaiting trial for sedition, rebellion and misuse of public funds. Photograph: Gabriel Bouys/AFP/Getty Images

Spain’s supreme court has refused to grant special leave to jailed pro-independence leader Jordi Sànchez, blocking his bid to be sworn in as Catalan president.

The Catalan parliament was scheduled to hold the investiture session on Monday, but with Mr Sànchez, who is the only candidate nominated, unable to attend, the region’s political limbo looks set to continue.

Mr Sànchez has been in prison since September, awaiting trial, along with three other pro-independence politicians, for sedition, rebellion and misuse of public funds.

As well as refusing to grant special leave to Mr Sànchez for the investiture, supreme court judge Pablo Llarena also rejected on Friday his request to be freed ahead of his trial. The magistrate decided there was a risk that the jailed leader would again commit one or more of the crimes of which he is accused.

The judge referred to Mr Sànchez’s participation as a candidate in the December Catalan election on the Together for Catalonia (JxCat) ticket, “which has refused, expressly and permanently, to tackle any political issue other than implementing [independence].”

Madrid introduced direct rule in the northeastern region in October, after a failed push for independence by the Catalonia parliament. Although secessionist parties retained a narrow majority in the election, they have failed to form a new government, with the judiciary barring two successive candidates: ousted regional president Carles Puigdemont, the JxCat leader who is in self-imposed exile in Belgium, and Mr Sànchez.

If the standoff continues and no government is formed, the Spanish government might call new Catalan elections.

The supreme court’s decision, which had been widely expected, came a day after the two main secessionist forces, JxCat and the Catalan Republican Left (ERC), had agreed on a governing plan for the region. They propose creating parallel Catalan institutions in Brussels, ensuring that Mr Puigdemont maintains his prominent political profile. They also call for a referendum on the creation of a Catalan constitution. However, wary of a possible reaction from the Spanish judiciary, the agreement is deliberately vague about timeframes and the issue of independence itself.

The pact is aimed at wooing a third pro-independence party, the Popular Unity Candidacy (CUP), whose votes would be needed in order to approve a separatist candidate as president. The CUP had expressed misgivings about Mr Sànchez’s suitability.

But despite the presentation of the road map, tensions remain between JxCat and ERC over how they should proceed.

The leader of ERC, Oriol Junqueras, and his deputy, Marta Rovira, published a joint letter on the party’s website calling for the independence movement to widen its support.

“If we want a republic, those broad and transversal majorities will be necessary,” the letter read, in what was seen as an appeal to left-leaning parties in Catalonia which oppose independence but are sympathetic to the idea of a Scotland-style referendum on the issue.