Clocks in 25 countries to make up for lost time 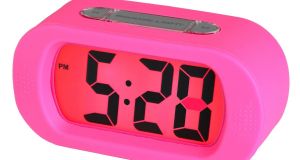 Clocks in 25 countries, from Poland to Portugal and Denmark to Turkey, will for the next few weeks be running fast. Or at least slightly so – and only those connected to and using the national electricity grids and setting their tick by the frequency of power from them.

The challenge they have been set, and will complete by Easter, is to catch up six minutes with their faster clockwork or radio-signal-based counterparts.

They went out of sync in January as a result of a dispute between Serbia and Kosovo, whose independence the former does not recognise, over who should pay for output from a power plant in Kosovo.

The resulting shortfall in the power supply from Kosovo was a drop in the frequency of the international grid’s current cycles from 50 to 49.996 hertz – the rate at which alternating current switches direction – and so clocks depending on the cycle for their timekeeping started to lose time.

The organisation that runs the continental grid, the European Network of Transmission System Operators for Electricity (ENTSO-E), announced on Thursday that it had reached an agreement with Serb and Kosovar authorities to end the disruption for now. The cycle will now be raised to just above 50 to allow clocks to catch up slowly.

The continental network had lost 113GWh of energy since mid-January because Kosovo had been using more electricity than it generates. Serbia, which is responsible for balancing Kosovo’s grid, had failed to do so, ENTSO-E said.

Since the war in Kosovo ended in 1999, the Serb-dominated north of Kosovo that remains loyal to Belgrade has not paid the Kosovo government for the energy it consumes.

Britain, Ireland, Norway, Sweden and the nations of the former Soviet Union which are not as tightly linked to the continental grid have not been affected.