South Korea sending envoys to US, China, Japan and Russia to brief them on developments 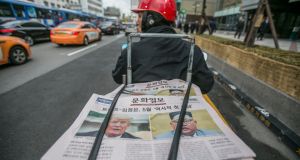 The shock news that Donald Trump will meet his North Korean counterpart Kim Jong-un has prompted a flurry of activity in Asia, with Beijing cautiously welcoming the news and South Korea sending envoys to the US, China, Japan and Russia for updates.

After months of tension, Mr Trump and Mr Kim – who not so long ago were referring to each other as a “mentally deranged US dotard” and “little rocketman” respectively – surprised everyone with their agreement to discuss the denuclearisation of North Korea at a summit before May.

The next few weeks will be a delicate balancing act as all the actors in the crisis try to keep momentum going without giving ground on issues such as nuclear security. Mr Moon has described the situation as like “walking on an ice plate”.

South Korea’s head of national security, Chung Eui-yong, who has played a central role in brokering an easing of tensions on the peninsula, is leading a delegation to the US.

“We cannot reveal everything to the media, but we do have additional views of North Korea we will relay to the United States when we visit the US,” Mr Chung told reporters, quoted by the Yonhap news agency.

Early next week he will travel with Seoul’s intelligence chief Suh Hoon to Japan, Russia and China to brief them on developments.

Japan, which fears being overshadowed by warmer ties between the two Koreas, has insisted that its relationship with the US is rock solid.

A big fear in Japan is always that the mercurial US leader will strike a deal with North Korea to protect American cities, but leave Japan exposed despite their strong alliance.

China, which is eager for stability in the region but also keen to keep a lid on US influence in a neighbouring country, has given a cautious welcome.

“We welcome the positive message that North Korea and the US sent out on their direct dialogue,” foreign ministry spokesman Geng Shuang told a news briefing.

It remains to be seen if China, an ally of North Korea in the Korean War (1950-53) that divided the peninsula and ended without a formal peace treaty, will push for a more central role in the peace efforts. China chaired the long-stalled six-party talks that also included both Koreas, Japan, the US and Russia.

The North Koreans are making the most of their moment. According to one of the envoys, Mr Kim joked that Mr Moon would no longer have to wake up early in the morning and preside over national security council meetings to discuss missile launches by the communist nation.

Mr Kim was also quoted as saying that whenever there is a problem he can now resolve it through a direct phone call with Mr Moon.

“So far, if we fired a missile President Moon Jae-in went through the trouble of convening a national security council meeting,” Mr Kim was quoted as saying on the Yonhap news agency. “As I made up my mind today, President Moon will no longer have to wake up early in the morning.”

Robert Kelly, a North Korea expert at South Korea’s Pusan National University, said in a tweet he believed Mr Trump was “woefully unfit” to handle talks with Mr Kim, and feared he would be outmanoeuvred in any talks.

“Obviously I hope I am wrong, but nothing in Trump’s management of his campaign or White House says he is focused or knowledgeable enough for something this high stakes. And that’s not ideology talking. I am a registered Republican and worked once for a GOP congressman. It’s just from watching three years of Trump’s shambolic incompetence.” .