Why I became a Nazi: New book reveals enthusiasm of early party members 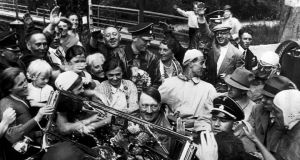 German peasants crowd around Adolf Hitler’s car as he is driven into Berchtesgaden on September 9, 1934. Photograph: AP Photo/File

Some 85 years after Hitler took power, with a far-right party now the country’s second most popular, Germany is wrestling once more with the question of political extremism. A new book, Why I Became a Nazi, offers previously unpublished insights into how fascism swept inter-war Germany with disastrous results.

“Hitler’s speeches contained something that made be believe again,” wrote Hilde Boehme-Stoltz, a 40-year-old from Duisburg, one of 683 early members of Hitler’s National Socialist (NSDAP) party who responded to an advertisement in 1934 asking them to explain their support.

The advertisement was the work of Prof Theodore Abel, a young US sociologist with Polish roots, who visited Germany a year previously. Anxious to understand motivations for joining the party, his advertisements in newspapers promised 400 reichsmarks in prize money for the best entries.

He received almost 700 responses, some up to 80 pages long, of which 581 have survived. The material was never used and, until now, lay forgotten in the archive of Prof Abel since his death in 1988.

German historians have welcomed the resurfaced contemporary reports: written before mandatory membership, before the Nazis used power to crush political opponents, and before they murdered millions of European Jews.

A common thread through this testimony of true-believer NSDAP members is a feeling of wounded national pride after the loss of the first World War, and fury at establishment parties.

The 48-year-old policeman Alfred Kotz from Berlin said he had found in the Nazi party values he had sought elsewhere: “masculinity, honesty, simplicity, modesty”.

People didn’t know nationalism and racism would lead to the second World War, 60 million dead and the Holocaust. People today who join Nazi ideology do

The 34-year-old Hans Thaysen, member number 80, said “an invisible power radiated from Hitler that put everything under his spell”.

The NSDAP took power in 1933 promising to restore prosperity, pride and community to the battered German people. Spicing up their political programme: anti-Semitism, xenophobia, anti-Marxism and conspiracy theories.

The personal biographies came from all parts of Germans and from all social classes: from workers and teachers to aristocrats.

“On January 30 1933 Germany became our Germany,” wrote Friedrich Christian Prinz zu Schaumburg-Lippe, a party member from 1929 and publisher of an early Nazi newspaper. “The state power that previously opposed us, became ours.”

Wieland Giebel, publisher of the new book, said early NSDAP members’ motivations had parallels to today’s political landscape: frustration that everything is wrong with German society and that politicians are more preoccupied with power and in-fighting than solving problems.

Another parallel between then and now: a feeling of being abandoned and economically vulnerable – often more subjective more than objective.

“Although we live in one of the world’s most prosperous countries there are still people who whinge,” he said. “The difference is that, then, people didn’t know nationalism and racism would lead to the second World War, 60 million dead and the Holocaust. People today who join this Nazi ideology know this, and they still think this way.”