Also, Merkel’s alliance slips to 28%, its lowest-ever level of support in the poll’s history 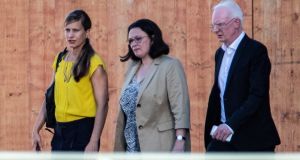 Germany’s centre-left Social Democratic Party has ended a humiliating week in Berlin with a slap across the face: a poll putting them behind the far-right Alternative für Deutschland (AfD).

The five-year-old AfD has risen to 18 per cent and, for the first time, occupies second place in the Deutschlandtrend poll for ARD public television – one point ahead of the 155-year-old SPD.

After historic defeats a year ago in the federal election, a repeat of Friday’s poll numbers at the ballot box would strip the CDU/CSU/SPD alliance of its parliamentary majority.

The poll was taken just as coalition leaders agreed on Tuesday to shift Germany’s domestic intelligence chief into the interior ministry. It was an attempt to end controversy over remarks by Hans-Georg Massen over whether an eastern German city had experienced mob rule following a stabbing of a local man with asylum-seeker suspects.

“The consistently negative reaction from the population shows we were mistaken. We lost trust instead of restoring it,” wrote Ms Nahles in the letter to Dr Merkel.

Demanding they “reflect and reconsider” Tuesday’s agreement, a shaken SPD leader hopes her letter redirects attention back on the chancellor and on her political ally Horst Seehofer.

As CSU leader, federal interior minister and Mr Maassen’s boss, Mr Seehofer has been the intelligence head’s most staunch defender in the recent controversy.

With his party facing re-election next month in its native Bavaria, however, Mr Seehofer is wary of anything that looks like political climbdown. A rethink made sense, he said on Friday, “if a consensual solution is possible”.

Dr Merkel agreed that it was “right and necessary” to meet again on Mr Maassen, insisting it was important the government worked to address ordinary people’s concerns.

With affordable housing the most pressing political issue, her government promised on Friday to build 100,000 social housing units before the next election.