Joe Biden says immigration key in emergence of modern US 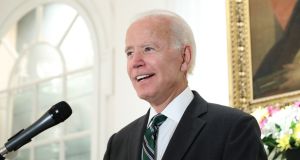 Former US vice-president Joe Biden at a reception for the launch of the Cambridge History of Ireland at the Irish ambassador’s residence in Washington on Monday night. Photograph: Marty Katz

Former vice-president Joe Biden has praised the role played by immigration in the emergence of modern America, in a speech at the residence of the Irish ambassador in Washington DC.

Mr Biden, who is rumoured to be considering a run for president in 2020, launched the four-volume Cambridge History of Ireland in Washington on Monday.

In a wide-ranging speech, Mr Biden spoke at length of his Irish heritage, which he traces to Co Mayo and Co Louth. He said the unique experience of the Irish in America had passed down a “value set” to Americans.

“When you know suffering, when you know pain, when you have gone through difficulties, when you’ve been through the short end of the power spectrum you understand, you have insight, you have empathy that I think is greater than most people ordinarily have. I really believe that. I believe that is part of what we inherited from our parents.”

Immigrants have “made us who we are”, he said, noting the passion that “runs through the bloodstream of Americans and Irish Americans alike”.

“Everyone, no matter who they are, is entitled to be treated with dignity,” he said.

While Mr Biden did not mention President Donald Trump during his speech, he highlighted what he said were the positive attributes of immigration.

“The reason why we’re the country we are is because of immigration. We got to cherry-pick the best of every single culture.”

“Xenophobia steps in every once in a while and lasts for a period of one to six or seven years, but we always overcome it,” he said.

Asked if he was considering a run for president in 2020, Mr Biden declined to answer, but he added: “I am running to change the attitude. There is no reason that we should be depressed in America. There is so much opportunity.” Highlighting the fact that America is still a bigger economy than Russia and China, he said that America should be optimistic about the future.

Mr Biden’s appearance at the Irish residence was the latest in an increasing number of public appearances in recent months – fuelling speculation that he may consider a run for president in 2020.

Early this month he attended a Labor Day parade in Pittsburgh alongside union workers – a key demographic which lies close to his blue-collar base.

On Saturday he addressed the Human Rights Campaign, saying that he regretted not speaking up against Mr Trump sooner.

“Instead of using the full might of the executive branch to secure justice, dignity, and safety for all, the president uses the White House as a literal, literal bully pulpit, callously exerting his power over those who have little or none,” he said.

Mr Biden has publicly said that he intends to campaign heavily for Democrats ahead of November’s mid-term elections. He has already endorsed dozens of Democratic candidates for Senate, House, governor and other state races, and will appear at a fundraiser for the Democratic National Committee (DNC) later this month in Boston.

But the real question occupying minds in Washington is whether he will run for president in 2020.

Mr Biden twice ran unsuccessfully for the Democratic nomination – in 1998 and 2008. He considered a run in 2016, but ultimately decided against it. In his recent memoir he says that he decided not to run because he feared a smear campaign by Hillary Clinton’s supporters that would “stop at nothing”.

His decision about whether to run also took place in the context of huge personal trauma after his son Beau died of brain cancer.

While questions have been raised about Mr Biden’s age – he turns 76 in November – his supporters don’t believe this is a problem, noting that Mr Trump is 72 years of age.

Speaking at the launch of the Cambridge History of Ireland, Ireland’s ambassador to the United States, Dan Mulhall, highlighted the role that Ireland and its emigrants had across the world throughout history.

Noting the role played by America in Ireland’s emergence as an independent state in the early 20th century, he said that Mr Biden’s own Irish heritage epitomised the deep links between Ireland and America that continue to define the Irish-American experience.

The Cambridge History of Ireland was published earlier this year, and includes contributions from more than 100 historians. The landmark work has already exceeded publication expectations. Its American launch continues with events in New York and Boston later this week.