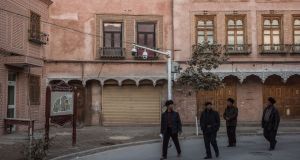 Kashgar in China’s Xinjiang province: Tensions between Uighurs and the ethnic Han majority in China have intensified, and hundreds have died in terror attacks and unrest. Photograph: Gilles Sabrié/The New York Times

Social stability in Xinjiang has been “hard-won”, China’s public security minister has said, calling for greater “reform through education” for prisoners in the restive western region against a background of international criticism of China’s security clampdown there.

UN human rights experts, European governments and academics have criticised the mass detentions of more than one million people from the mostly Muslim Uighur population in Xinjiang, as well as other Muslim minorities living there. Some US lawmakers have called for sanctions.

China says it is trying to defend its people against Islamist militants and separatists, and insists the mass detentions are a form of vocational education to stop the spread of Islamic fundamentalism.

Tensions between Uighurs and the ethnic Han majority in China have intensified in recent years, and hundreds have died in terror attacks and unrest.

Public security minister Guo Shengkun launched a robust defence of China’s actions after a three-day inspection of the region, saying stability there “should be greatly cherished”.

“We should comprehensively adopt political education, psychological counselling and vocational training, innovate and strengthen reform through education work for prisoners, and make efforts to make them turn over a new leaf,” he said, quoted in the official newspaper People’s Daily.

More should be done by the Xinjiang police to “let the masses feel safer and that the services is right besides them”, Mr Guo said.

‘Pips in a pomegranate’

He urged cadres to visit the homes of minorities to raise the understanding of Chinese culture, the Communist Party and the “great motherland” so that “we are truly held tightly together like the pips in a pomegranate”.

Earlier this week, Dolkun Isa, president of the exiled World Uyghur Congress, told a panel at the UN Human Rights Council in Geneva that Uighur identity itself was being targeted.

“Every Uighur family in the diaspora has a family member detained in the camps,” he said. Inmates included Mr Isa’s brother and at least 56 professors from Xinjiang University.

“Mass imprisonment of more than one million people cannot be justified on any grounds,” Mr Isa said. “UN member states have an absolute obligation to act immediately.”

A German expert on minority policy, Adrian Zenz, told the same panel the detentions appeared to be “the most intensive social re-engineering effort of the Chinese state since the Cultural Revolution”.

“In Xinjiang we are looking at a minimum of several hundred thousand, possibly over one million in possibly over 1,000 to 1,200 facilities,” he said.

China’s foreign ministry said booming tourism was a sign that things were going well in Xinjiang, and the province was stable, with a growing economy, people living in harmony and enjoying religious freedom. The territory had more than 100 million domestic and overseas tourists last year, up a third on the previous year.

“If Xinjiang were not safe, stable and harmonious, then there would not be so many Chinese and foreign tourists going to Xinjiang for sight-seeing,” foreign ministry spokesman Geng Shuang told a news briefing.

Policies in Xinjiang were designed to promote regional stability, encourage development and improve the livelihood of people, as well as unite the people, he said.

In a separate development, China’s energy chief Nur Bekri, a former governor of Xinjiang and one of the most senior ethnic Uighurs in the Communist Party, was being investigated for corruption.

The director of the National Energy Administration was being probed for a “serious violation of discipline and law”, a common euphemism for a corruption investigation, according to a statement from the National Supervisory Commission.