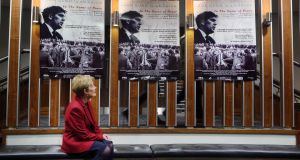 John Hume’s wife Pat pictured in the Savoy Cinema in Dublin for the premiere of ‘In the Name of Peace: John Hume in America’ last November. Photograph: Leon Farrell/Photocall Ireland

Last Sunday, residents of the small town of Springfield, Massachusetts gathered for a screening of Maurice Fitzpatrick’s In the Name of Peace: John Hume in America.

The film charts the life and times of the man that many believe was the true driver of the Northern Ireland peace process.

Through interviews with key players in the peace process – including two former US presidents, two former British prime ministers, and a host of senior figures from Irish political and cultural life – Fitzpatrick tells the story of Hume’s political career.

The film is a compelling reminder of the role played by the White House and Congress in the early days of the Troubles.

John Hume’s wife Pat recalls John’s surprise on receiving a phone call in 1971 from Ted Kennedy, who was on his way to Bonn for a Nato meeting. He took out a loan from the credit union and flew to Germany. The meeting between the two men in the Irish ambassador’s residence was to have a seminal impact on the senator’s understanding of the Northern Ireland conflict. As former diplomat Sean Donlon recalls in the film, after the meeting Kennedy told the ambassador: “That’s the man – that’s the man I will listen to.”

Though Bill Clinton tends to be most associated with the Northern Ireland peace process, the film is a reminder of the important role played by previous administrations and presidents in the early days of the Troubles, including Jimmy Carter, who is interviewed by Fitzpatrick.

It also highlights the enormous political risks taken by many in Washington at that time. Many in the administration and state department were wary of jeopardising the “special relationship” between the United States and Britain. Irish-American members of Congress also faced a backlash from IRA sympathisers in their own constituencies.

Charles Dougherty, a congressman from Philadelphia, recalls how he was called a “traitor” by many of his constituents after he lent support to the Friends of Ireland caucus in Congress established by House speaker Tip O’Neill, which supported the Hume idea that dialogue was the only solution to the conflict.

Sunday’s screening was one of a number of showings of John Hume in America that will take place across America in the coming weeks and months. The interest in Hume and his political legacy is an indication of the continuing strength of Irish-American identity in America, despite the decrease in immigration from Ireland to the US in recent decades.

The town of Springfield, about two hours drive west of Boston, has particular links with Ireland. Historically, thousands of Irish settled in this picturesque area of Massachusetts, many drawn to work in the factories located alongside the Connecticut River that flows through the state.

In this small corner of Massachusetts Irish-American identity is still alive and well. After the film’s screening, the audience retreated to the Irish Cultural Centre of Western New England, where they heard from Irish ambassador Dan Mulhall, John Hume’s son Aidan, local congressman Richard Neal, as well as film-maker Maurice Fitzpatrick.

The ambassador recalled that Douglas Hyde had visited Springfield in 1905, one of 55 American towns he visited during his trip to the United States. The founder of the Gaelic League and future president was particularly impressed by the locals’ knowledge of the Irish language.

The Irish soon made West Springfield home, and as Richard Neal, the congressman for the district pointed out with a smile, politicians needed to listen to them. “The Irish voted. They always had a sense of civic participation. Ultimately that led to one of their own, John F Kennedy, reaching the White House.”

As local residents mingled with guests over clam chowder and beef stew, the centre’s loquacious manager Sean Cahalane oversaw proceedings. A proud Irish-American, he explained that his own mother had emigrated from the Blaskets after the second World War. Like many of the residents he grew up in an Irish-American family where Irish was frequently spoken.

He said that the centre, which recently reopened after renovation, aims to be a community space not only for Irish-Americans but for all citizens. “It’s about community, about coming together – it’s what life is about,” he beamed in his broad Massachusetts accent. “In these times, it’s important to bring people together, whatever their background.” It’s a sentiment John Hume would no doubt endorse.