Theresa May ambushed by her own disastrous Brexit strategy 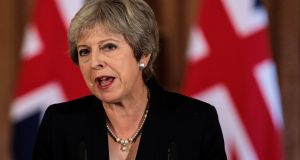 British prime minister Theresa May ruled out two of the options still on the table after the remains of Chequers have been taken away. Photograph: Jack Taylor/Reuters

Theresa May’s defiant words in Downing Street may have been bombastic enough to have bought her the respite she needs from her Brexiteer critics to get through the Conservative Party conference later this month.

That had been her hope from the Salzburg summit, where she expected the other EU leaders to offer warm words and a stay of execution for her Chequers plan. Instead, according to much of the British press, the prime minister was the victim of an ambush when EU leaders declared her plan unworkable and said there would be no Brexit deal without a legally operable backstop for the Border.

But if the prime minister was ambushed by anything it was by the reality that her plan for partial access to the single market was always doomed and by her own disastrous strategy for keeping it alive. It was Britain, not the EU, that hyped the Salzburg meeting in advance as a moment of truth for Brexit, spinning that it was May’s chance to sell the Chequers plan directly to the other leaders.

But during her 10-minute presentation after dinner at the Felsenreitschule on Wednesday night, May presented Chequers not as a first step towards a deal but as a take it or leave it offer. Then on Thursday morning she told Taoiseach Leo Varadkar that there could be no deal on the backstop by next month’s EU summit. May on Friday accused the EU of treating Britain with disrespect but it was her intransigent message that provoked the other leaders into plain speaking, declaring Chequers dead and warning that there would be no November summit and no withdrawal agreement without progress on the backstop.

In her Downing Street statement, the prime minister ruled out two of the options still on the table after the remains of Chequers have been taken away: remaining in the European Economic Area like Norway; and the Canada-style free trade agreement favoured by her Brexiteer backbenchers. One of her arguments against a Canada-style deal is that it does not address the issue of keeping the Border open so it would mean falling back on the backstop.

In his presentation to EU leaders in Salzburg, Michel Barnier identified four categories of checks on goods arriving into Northern Ireland from the rest of the UK that would be required under a backstop: customs, VAT, regulatory compliance and Sanitary and Phytosanitary Measures (SPS). Companies in Great Britain could make customs and VAT declarations online, with barcode scanning taking place at British ports, on ferries or in Northern Ireland.

Regulatory compliance would be enforced in the market, requiring no checks at any border. SPS checks would have to be conducted at Northern Irish ports as they are now, although the volume would increase from 10 per cent checked now to 100 per cent after Brexit.

May has not ruled out regulatory checks on goods going from Great Britain to Northern Ireland but insist that there can be no customs border in the Irish Sea and that the North cannot be part of a different customs territory from the rest of the UK. MPs in all parties supported an amendment to a customs Bill before the summer recess endorsing that position, although the Bill is still in the Lords and has not become law.

If Britain and the EU agree a regime for regulatory checks between Britain and Northern Ireland, can they find a creative formulation to allow different customs rules to apply in the North too? EU officials point to the example of the Canary Islands, which are part of Spain and thus of the EU but are not part of EU territory for the purposes of VAT. Still, under the EU’s proposals, if Britain were in future to negotiate a trade deal with China or the United States that involved changing tariffs, Northern Ireland would have to retain the same tariffs as the EU.

May is likely to maintain her defiant tone about the EU at least until after her party conference is over. But her negotiators will be back in Brussels next week, working with Barnier’s team on the tedious details of the untidy compromise on which the future of Brexit and the Border depends.