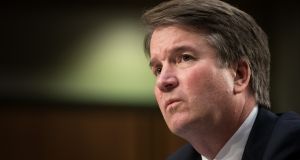 US president Donald Trump on Wednesday stepped up his defence of his supreme court pick Brett Kavanaugh, saying it is hard to imagine the judge committed a sexual assault and that it would be unfortunate if the nominee’s accuser does not testify before the Senate.

“Look, if she shows up and makes a credible showing, that will be very interesting and we’ll have to make a decision. But I can only say this: he’s such an outstanding man – very hard for me to imagine that anything happened,” Mr Trump told reporters at the White House. The Republican president said he wanted the Senate confirmation process for his nominee to play out.

“I think he’s an extraordinary man. I think he’s a man of great intellect, as I’ve been telling you, and he had this unblemished record. This is a very tough thing for him and his family. And we want to get it over with,” Mr Trump said.

The president’s comments came days after the woman who has accused Mr Kavanaugh of sexual assault said she has received death threats in the wake of her allegations.

In a letter to the US Senate judiciary committee, lawyers for the woman, Christine Blasey Ford, effectively ruled out her appearance at the committee’s planned public hearing on the issue next Monday, instead stating that an FBI investigation should be the “first step”.

“A full investigation by law enforcement officials will ensure that the crucial facts and witnesses in this matter are assessed in a non-partisan manner, and that the committee is fully informed before conducting any hearing or making any decisions,” the letter said.

The FBI has said it is not investigating the allegations.

The letter also revealed that Ms Blasey Ford has been the target of “vicious harassment and even death threats” since she publicly accused Mr Kavanaugh of assaulting her when both were teenagers.

“As a result of these kind of threats, her family was forced to relocate out of their home. Her email has been hacked, and she has been impersonated online,” it said.

Ms Blasey Ford’s call for an FBI investigation before any hearing raises the prospect of a standoff between Republicans and Democrats.

Senate Democrats have called for the matter to be investigated, but Mr Trump ruled that out on Tuesday.

“I don’t think the FBI really should be involved because they don’t want to be involved,” he said.

Committee chairman Chuck Grassley said that the invitation for Ms Blasey Ford to testify on Monday “still stands”, noting that an FBI investigation should not affect her testimony in the Senate.

Republican senator Lindsey Graham suggested that Republicans would move on with the vote on Mr Kavanaugh’s nomination if Ms Blasey Ford does not testify.

“If she does not come on Monday, we are going to move on and vote on Wednesday,” he told Fox News.

Mr Graham also said on Twitter that requiring an FBI investigation of a 36-year-old allegation “is not about finding the truth, but delaying the process till after the midterm elections” on November 6th.

The apparent decision by Ms Blasey Ford not to attend next Monday’s hearing is the latest twist in a controversy that has engulfed Washington since the weekend.

On Sunday, the 51 year-old Washington DC native, who is now a professor in California, said that Mr Kavanaugh, when a high school student in Washington DC, pinned her to a bed, groped her and covered her mouth to stop her from screaming.

The accusations have threatened to derail his confirmation as a supreme court justice, which had been expected in the coming weeks.

The 53-year-old judge, who had been nominated this summer by Mr Trump to replace Mr Justice Anthony Kennedy, had widely been expected to be endorsed by the judiciary committee and the full Senate, paving the way for him to join the nation’s highest court before the mid-term elections.

Mr Trump had previously waded into the controversy on Tuesday, expressing sympathy with the man he nominated to the Supreme Court but failing to mention his accuser.

“I feel so badly for him that he is going through this, to be honest with you,” Mr Trump said during a joint press conference at the White House with Poland’s president. “This is not a man who deserves this.”

Mr Trump did not mention Ms Blasey Ford, though he said: “Hopefully the woman will come forward and state her case. He will state his case, before the United States senate.”

As the controversy continued to grip Washington, John Cornyn, the second most senior Republican member on the Senate judiciary committee appeared to question the accuser’s credibility, saying there were “gaps” in her account. “The problem is, Dr Ford can’t remember when it was, where it was, or how it came to be,” he said.

Senate Democrats renewed their attacks on Mr Kavanaugh on Tuesday. They also clashed with Republicans about the scope of any hearing, with some arguing that Mark Judge, a friend of Mr Kavanaugh whom his accuser claims was in the room where the alleged assault took place, should be questioned.

In an opinion piece in the New York Times, Anita Hill, the woman at the centre of a similar controversy 27 years ago when she accused supreme court nominee Clarence Thomas of sexual harassment, said that the Senate judiciary committee now had the chance to “do better.”

Ms Hill, now a professor at Brandeis University, testified before the committee in October 1991 and was subjected to relentless questioning, but Mr Justice Clarence Thomas was ultimately endorsed by the Senate.

“In 1991, the Senate judiciary committee had an opportunity to demonstrate its appreciation for both the seriousness of sexual harassment claims and the need for public confidence in the character of a nominee to the supreme court. It failed on both counts,” Ms Hill wrote.

“There is no way to redo 1991, but there are ways to do better . . . the 2018 Senate judiciary committee must demonstrate a clear understanding that sexual violence is a social reality to which elected representatives must respond.” – Additional reporting: Reuters