Member states should receive an ‘impressive’ quantity of doses by March 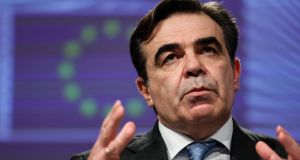 European Commission vice-president Margaritis Schinas says the commission is working with the pharmaceutical companies to speed up the manufacture of vaccines where possible. Photograph: Kenzo Tribouillard/ EPA

European Union countries should vaccinate at least 80 per cent of health workers and those aged over 80 against Covid-19 by March, and 70 per cent of the overall adult population by summer, the European Commission has said.

The targets were proposed as EU member states prepare to discuss their vaccination strategies this week as the continent struggles to curb the pandemic, which has now claimed 620,000 lives in Europe, according to the European Centre for Disease Prevention and Control.

Commission vice-president Margaritis Schinas said that by the end of March he expected pharmaceutical companies to be delivering “an impressive quantity of doses” to member states and that governments would have to speed up vaccination programmes to keep up.

“I think we will have all the necessary capacity that is needed,” Mr Schinas said.

Two vaccines, made by BioNTech-Pfizer and Moderna, have been approved by the European Medicines Agency to date and are being delivered to member states under a joint EU purchase agreement. A third by AstraZeneca may be approved by the end of the month. The commission was working with the companies to speed up manufacturing where possible, Mr Schinas said.

National leaders will hold a video conference on Thursday to discuss co-ordination of the pandemic response, particularly on vaccination programmes.

The commission has called for EU member states to issue vaccination certificates to each person who receives the vaccine, and for these certificates to be mutually recognised across the bloc.

This would open the door for some governments to choose to ease restrictions for people who have received the vaccine, for example, by allowing vaccinated people to skip quarantine or testing requirements.

The governments of some member states including Greece have called for the creation of a pan-EU “vaccination passport” to allow people who have received the vaccines to travel more freely in the bloc, an important issue for the tourism-dependent state.

However, this has been resisted by countries including France, which is administering vaccines at a much slower rate than other EU states and where 46 per cent of the population do not wish to be vaccinated, according to a survey this month by Ifop.

The commission warned against the risk of “Covid fatigue” taking hold in populations in the months to come as vaccinations are rolled out.

Member states must convince the public to do all they can to curb the spread of the virus, including restrictions and distancing, to reduce the risk of new mutations emerging that the vaccines will not work against, the commission urged. In particular, non-essential travel “should be strongly discouraged”.

“Now, in particular, we need swift and co-ordinated action against the new variants of the virus,” health commissioner Stella Kyriakides said.

“Vaccinations will still take time until they reach all Europeans and, until then, we must take immediate, co-ordinated and proactive steps together. Vaccinations must accelerate across the EU, and testing and sequencing must be increased – this is so we can ensure that we leave this crisis behind us as soon as possible.”