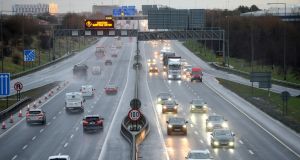 Dublin city commuter traffic has hit almost 60 per cent of pre-coronavirus levels this month, despite the return of Level 5 restrictions on travel.

The number of vehicles travelling in and out of the city at morning and evening peak times began to drop rapidly from the first week of last March, hitting a low at the end of the month when strict Covid-19 restrictions on travel were introduced.

At that point, when travel was restricted to 2km except for essential reasons and most businesses were closed, traffic volumes fell to just over a third of their normal levels.

While the current restrictions limit travel to 5km, and almost all shops, cafes and restaurants are closed, the number of vehicles travelling in and out of the city at morning and evening peak times at the end of the first working week of January was at 57-59 per cent of pre-Covid-19 levels, almost double the volumes at the end of March.

While the figures – which relate to the period from January 3rd to January 9th – are particularly high, given the closure of large numbers of businesses and people still being encouraged to work from home, they do represent a drop on the previous month.

Traffic volumes in the city centre had, by the middle of December, reached 86 per cent of pre-Covid levels, as the Government relaxed restrictions for the Christmas period.

While car volumes remain high, the Level 5 restrictions have had a significant effect on the numbers of pedestrians and cyclists in the city, the council said.

The number of cyclists had “decreased to the levels last seen back in April 2020”, the council said. “During the peak morning time, 7am-10am, cycling numbers are at approximately 20 per cent of pre-Covid levels for January 2021.”

While footfall in the Christmas shopping period from the start to the middle of December had reached a high of 60 per cent of pre-Covid levels, it had also “dropped dramatically” since restrictions were reintroduced, the council said.

Meanwhile, the council has decided to delay the pedestrianisation of several areas around Grafton Street until the restrictions are eased.

While the council said the scheme would still go ahead: “due to the current level of Covid restrictions it is not planned to implement the proposed traffic restrictions in January. The timetable for the implementation will align instead with the restrictions being eased.”