Staff at the Royal London Hospital say they have been "slammed" with the sheer numbers of patients being admitted to intensive care units as the coronavirus pandemic grips the UK. Video: BBC 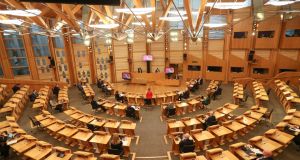 Germany and Scotland have announced that their respective Covid-19 restrictions will remain in place until at least mid-February.

German Chancellor Angela Merkel and state premiers agreed on Tuesday to extend a lockdown for most shops and schools until February 14th as part of a package of steps to try to rein in the coronavirus, sources told Reuters.

They also agreed to mandate medical masks for passengers on public transport, the sources familiar with the ongoing discussions said. The existing lockdown runs until January 31st.

New infections have been decreasing in recent days and pressure on intensive care units has eased slightly, but virologists are worried about the possible spread of more infectious variants of the virus.

“The infection numbers have been going down for several weeks, or stagnating, and that’s good,” Berlin mayor Michael Muller told German television. “Now we are facing a very aggressive mutation that we have to respond to.”

He said one focus would be boosting working from home.

“There is much more room for manoeuvre,” said Muller, adding states aimed to get employees to have to justify why employees had to travel to work.

Leaders would also discuss curfews, already in place in some states, but it was unlikely they would be imposed everywhere, he said.

The number of confirmed coronavirus cases had risen by 11,369 to 2.05 million, the Robert Koch Institute for infectious diseases showed on Tuesday. The death toll was up 989 at 47,622.

In Scotland, restrictions are also to be extended until at least the middle of February in Scotland, with schools remaining closed to the majority of pupils, Nicola Sturgeon announced.

The first minister told the Scottish Parliament that Covid-19 case numbers have “stabilised and even declined”.

But she said any relaxation of lockdown while cases remain high could “quickly send the situation into reverse”.

As a result, Scotland is to remain in lockdown until at least the middle of February and schools will also remain closed to the majority of pupils.

Ms Sturgeon told MSPs: “That means that the lockdown restrictions – including the strict stay-at-home requirement – will remain in place across mainland Scotland and some island communities until at least the middle of February.”

She added: “The Cabinet decided today that – except for vulnerable and key worker children – school and nursery premises will remain closed until mid-February.”

The situation will be reviewed on February 2nd, the first minister said, adding: “If it is at all possible, as I very much hope it will be, to begin even a phased return to in-school learning in mid-February, we will.”

Mainland Scotland was placed into lockdown on January 4th to tackle the rising spread of the new coronavirus strain.

The measures include a legally-enforceable stay-at-home order.

Schools were initially meant to emerge from Scotland’s second lockdown on February 1st.

The first minister also told MSPs that Barra and Vatersay in the Western Isles will move from Level 3 of restrictions to Level 4 – the highest tier – at midnight on Tuesday.

This is due to a “significant outbreak” of Covid on the island.

Giving an update on vaccination numbers, Ms Sturgeon said that, assuming vaccine supplies meet expectations, Scotland will be “on track to be vaccinating 400,000 people a week by the end of February”.

“That means that in around three months’ time, around three million people in total will have received at least the first dose of the vaccine,” she said.

“This is, of course, the majority of the adult population and includes everyone over the age of 50, and many younger people with an underlying health condition.”

On Tuesday, the UK has recorded a further 1,610 coronavirus deaths – the highest number reported on a single day since the outbreak began.

Public Health England said the figure was of those who had died within 28 days of testing positive for Covid-19 as of Tuesday, bringing the UK total to 91,470.

Separate figures published by the UK’s statistics agencies for deaths where Covid-19 has been mentioned on the death certificate, together with additional data on deaths that have occurred in recent days, show that there have now been 108,000 deaths involving Covid-19 in the UK.

The government also said that, as of 9am on Tuesday, there had been a further 33,355 lab-confirmed cases of coronavirus in the UK.

Responding to the latest figures, shadow health secretary Jonathan Ashworth tweeted: “Awful. Horrific. Devastating. And it didn’t have to be like this.”

Louisiana became the latest US state to report a case of the more transmissible coronavirus variant first found in the UK Cases in the US have slowed, and new infections in New York state fell from a record. Virginia’s infections rose to a new high.

The milestone means one in 10 people in LA county has tested positive at some point in the outbreak. The county also reported its first case of the UK variant – a man who recently spent time in the area before travelling to Oregon, where he’s isolating.

On Friday, at least three more states, including Utah, Oregon and Illinois, reported cases as the Centers for Disease Control and Prevention warned that it could become the dominant strain in the US as soon as March. More than 15 states have reported cases, some involving people with no history of travel.

Virginia reported 6,757 new cases, a record since the start of the pandemic, state data show. Another 50 people died, for a total 5,706 fatalities. Cases, hospitalisations and deaths have all been on a general rise in the state since November.

North Carolina reported 83 deaths Saturday, pushing the total to more than 8,000. The state, hit hard in the latest virus wave, passed 7,000 deaths 10 days ago. Another 7,986 new infections were reported, down from the previous day, and hospitalisations fell for the second consecutive day, state data show. – Reuters/PA/Bloomberg