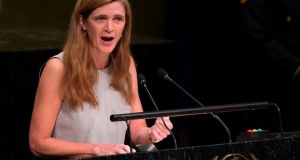 Throughout his almost 50-year career in politics, Joe Biden has often recalled the words of his grandmother. “Remember, Joey Biden, the best drop of blood in you is Irish,” she told him as he made his way in the world.

Biden has consciously connected with his Irish heritage throughout his life. Though his roots go back several generations to the mid-19th century, when his ancestors emigrated from Louth and Mayo, his Irishness has always been a core part of his identity.

Much of that reflects the milieu in which he was raised. Both sides of his Irish-born family eventually settled in Scranton, a small but once-vibrant industrial city in rural Pennsylvania.

One of Biden’s first engagements after losing his first wife and daughter in a car crash in 1973 and being sworn in as a young senator at his son’s hospital bed was to return to Scranton to speak at the Friendly Sons of St Patrick’s local branch dinner.

Almost half a century later, Biden is poised to become the next president of the United States. Arguably, he will be the most Irish-American president since John F Kennedy, the only other Catholic to occupy the White House, though Ronald Reagan was also proud of his Irish roots. It was during the Reagan years that the tradition of the annual St Patrick’s Day lunch on Capitol Hill began, and the Republican president also heartily embraced the bowl of shamrock tradition that has become the symbol of Irish-American diplomacy.

Biden’s emotional quoting of James Joyce on Tuesday in his speech as he left Delaware, is an example of how Ireland is woven into his personal identity. But he also has a very real understanding of the political issues facing the country. As the senator from Delaware for 36 years, he was involved in Irish issues, including during the peace process. He was a member of the Friends of Ireland caucus, a bipartisan group of Congress members established 40 years ago.

Recently unsealed State papers show that he proposed a resolution in 1990 calling for the reopening of the Birmingham Six case and for then president George HW Bush to raise the issue with Margaret Thatcher. According to the Department of Foreign Affairs, Biden’s resolution put significant pressure on the British government.

More recently, Biden and his team have shown an intricate understanding of the Brexit implications for Ireland and Northern Ireland. The soon-to-be president’s intervention in the debate to warn London about the sanctity of the Belfast Agreement is believed to have significantly influenced decision-making in Downing Street.

The role Biden, and particularly the Democrat-controlled Congress, will have on the outcome of ongoing UK-US trade negotiations also focused minds in London.

Biden has appointed several Irish-Americans to his senior team. Dublin-born Samantha Power, the former ambassador to the United Nations, will head up USAid, America’s main federal aid agency. Incoming national security adviser Jake Sullivan has been involved with the Washington Ireland Program, an exchange programme that develops links between the US and Ireland. He was also one of the signatories to a 2019 letter calling on Theresa May to respect the Belfast Agreement.

Amanda Sloat, senior director for European affairs at the National Security Council, studied at Queen’s University Belfast. Incoming White House deputy chief of staff Jennifer O’Malley Dillon is a board member of the Washington Ireland Program, as is Carmel Martin, who has been appointed to the Domestic Policy Council.

John McCarthy, vice-president of Irish American Democrats, has also been appointed to a senior White House role. There will also be an Irish flavour to Wednesday’s inauguration. Irish violinist Patricia Treacy will perform at the ceremony; The Chieftains had been invited to play but were unable to travel due to coronavirus restrictions.

While the new administration’s understanding of Irish issues will be crucial as Ireland seeks to position itself as a bridge between the United States and Europe post-Brexit, it may also benefit the country in other ways. Biden is expected to unveil an immigration Bill as early as Wednesday, including an eight-year path to citizenship for the undocumented. A revival of the E3 Bill to open up new visa options for Irish people eager to live in the US may also get a hearing from the Biden administration.

As for a presidential visit to Ireland, that prospect remains very much up in the air. Biden may attend the G7 summit, hosted by Britain in Cornwall in June. Tacking on a visit to Ireland during this trip is possible. An EU-US summit, though, floated by Brussels, appears highly unlikely in the coming months. Similarly, a Nato summit under consideration may not proceed in-person.

Nonetheless, it is possible that Taoiseach Micheál Martin will be one of the first foreign leaders to meet the new president at the White House.

With St Patrick’s Day occurring just eight weeks after the inauguration, Irish diplomats are pushing ahead with plans for some version of the annual meeting. At the very least, the occasion will be significantly scaled-back. The annual party at the White House, which was cancelled last year due to the escalating coronavirus crisis, is unlikely to take place. Discussions are under way about the annual speaker’s lunch at the US Capitol, but again, social distancing requirements make that a challenge.

What does seem clear is that, with an Irish-American in the White House, St Patrick’s Day is unlikely to go unmarked. Expect that famous Waterford Crystal bowl of shamrock to make an appearance in the coming weeks.