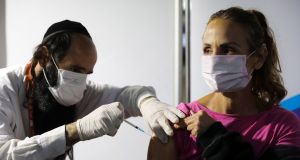 A woman receives a Covid-19 vaccine shot from a male nurse in Jerusalem, Israel. The vaccine is administered at 350 locations, ranging in size from local healthcare settings to large sports stadiums. Photograph: Abir Sultan/EPA

Precise advance planning. Meticulous information systems. Clear media communications. These are some of the factors Israel says has made it the front-runner globally in rolling out Covid-19 vaccines.

With 30 doses of vaccine already administered to every 100 people in its population, and 400,000 people now fully vaccinated with two doses, Israel has built on its quick start to become the country most likely to reach population immunity in the coming months.

The country’s success has attracted attention from countries across the globe keen to learn from its experience. An online briefing last week by the Israeli department of health attracted an audience of hundreds of government officials and journalists from different countries.

From this it was clear that much of this success is down to old-fashioned good organisation and co-operation between different agencies, though the government’s willingness to spend heavily on vaccines has also helped.

Key to Israel’s early success, according to Dr Asher Salmon of Israel’s department of health, has been a combination of advance planning and effective collaboration among government and health agencies, along with flexibility to deal with events as they occur.

In Ireland, there has been controversy over the administration of doses to young people or others not on the priority list. But in Israel, young people have queued up at centres to get vaccinated from leftover doses.

Aware of the psychological factors at play, planners decided to make the vaccine available to all people aged over 60 initially. This was done to create a visible demand for vaccines among the population, Dr Salmon says.

He acknowledges Israel paid “a bit more” than the EU for its vaccine supplies. “We paid the best price we could get. I don’t know what others did but yes, I think our terms were less favourable than yours.”

Yet he makes the point that the price of Covid-19 vaccines is “ridiculously low” compared to the “terrible economic damage” caused by virus-related economic closures.

Israel has also been criticised over the relative lack of vaccination of its Arab minority, and the difficulties the Palestinians in the West Bank and the Gaza Strip are experiencing in accessing supplies.

Dr Salmon says Israel has an interest in seeing the vaccine made available in the Palestinian Authority as quickly as possible. With 100,000 Palestinians passing in and out of the country daily, it would be impossible to eliminate the disease in one country without tackling it in the other, he says.

Take up has been lower among the Arab minority. Dr Salmon professes uncertainty as to the reasons, but suggests it could be linked to distrust of the authorities.

One early lesson learned was the need to break up supplies of the Pfizer/BioNTech vaccine into smaller consignments. The 975-vial units received were too unwieldy for many vaccination locations, given the onerous storage and transport requirements involved, and so had to be repackaged into smaller cases.

Heavy use was made of IT tools and call centres to back up the work of professionals in the field, by registering people, answering queries and alleviating concerns.

The number of leftover doses from administration schedules is monitored daily to ensure waste is minimised. These doses are then offered to non-priority groups.

Each weekend, the overall distribution plan is “reset” in preparation for the following week. Deliveries take place three times a week to ensure supplies do not expire.

The vaccine is administered at 350 locations, ranging in size from local healthcare settings to large sports stadiums. Staff were trained by Zoom to administer the vaccine.

The country’s first purchase deal was with Moderna, while agreement with Pfizer was not reached until last November, Dr Salmon says. But in both cases, Israel ordered significantly larger quantities of the new vaccines than other countries, many of which waited for cheaper alternatives to come on stream.

Like most countries, there have been bumps along the way, but with the speedy rollout of vaccines, Israel might yet get a happy end to this pandemic.