A further 24 deaths, 713 new cases reported in North with hospitals at 97% occupancy 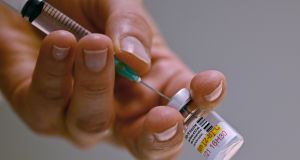 Around 48 per cent of over-80s have so far been vaccinated, Patricia Donnelly, the head of the Covid-19 vaccination programme in the North said. Photograph: Damien Meyer/AFP via Getty

More than 154,000 doses of coronavirus vaccine have now been administered in Northern Ireland and there is sufficient supply available to finish vaccinating the over-80s.

Patricia Donnelly, who heads the Covid-19 vaccination programme in the North, told reporters at a Department of Health briefing on Tuesday that additional doses of the vaccine had arrived and were currently being distributed to GPs.

She said 48 per cent of over-80s had so far been vaccinated, and this would allow doctors to finish inoculating this age group and to begin vaccinating the over-75s.

Residents and staff in only a “handful” of care home remained to be vaccinated, she said, and 75 per cent of people in the “phase two” vaccination group, covering health and social care staff and those who deliver services to vulnerable populations had also been vaccinated.

The vaccines which have so far been administered include 132,000 first doses.

Asked by The Irish Times about how leftover vaccine was used after it emerged that 16 family members of staff at the Coombe maternity hospital in Dublin had been inoculated with spare doses, Ms Donnelly said had only been given to “priority groups, not outside that.”

This could have included several hundred people in the seven weeks the vaccine programme had been operating in Northern Ireland, she said.

“They had anticipated this and had people on standby so we continued to operate within the priority list,” she said. “You don’t want to waste vaccine, and our vaccine wastage is well below one per cent . . . you then look to in those last few doses to vaccinate anyone you can.

“I can absolutely assure you these are not family members, these are all people, within health and social care and not outside those priority groups

These could include a hospital team or people working to support the vaccine programme, she said, “who probably would have got vaccinated a week later but they got their vaccine a little bit earlier,” Ms Donnelly said.

A further 24 people with Covid-19 have died in Northern Ireland, the North’s Department of Health reported on Tuesday.

The figure includes 17 people who died within the last 24 hours, and seven whose deaths were reported but did not occur within that 24-hour period.

It brings the total number of fatalities recorded by the Department to 1,649.

Hospitals in the North were operating at 97 per cent occupancy on Tuesday. A total of 842 patients with coronavirus were being treated in hospital, and 70 in intensive care.

The Chief Medical Officer, Dr Michael McBride, said Northern Ireland was “beginning to see the impact” of the lockdown which began on St Stephen’s Day in terms of the number of new cases.

However he said he anticipated that the hospital system would remain under “significant pressure for some many weeks” and there was still an “upward trajectory” in terms of the number of people requiring treatment in intensive care.

Hospitals, he said, were “seeing pressures like they have never seen at any stage before in this pandemic”, adding that health service staff were “facing a very difficult time at present and will do over the next couple of weeks.

However he indicated that the level of community transmission of the virus and the pressure on hospitals was such that it was likely to require an extension of the current lockdown measures.

“What we cannot allow to happen is to relax the current restrictions prematurely, see an increase again in community transmission and then see our hospital system face a further wave of increased admissions and increased pressures.”

According to figures released by the Police Service of Northern Ireland (PSNI) on Tuesday, more than 4,000 fines have been issues for breaches of the coronavirus regulations.

More than 1,000 prohibition notices were issued in connection with gatherings which break the rules.

Hospitality venues in the North are currently closed, but when restrictions have been eased live music has remained prohibited in indoor premises.

In a statement his solicitor, Joe Rice, said many people in the arts and music world in the North had been “devastated financially, socially and artistically by this complete ban.”

He said Mr Morrison was “taking this action on behalf of the thousands of musicians, artists, venues and those involved in the live music industry.

“He has been supporting many artists throughout this pandemic and is determined to ensure that, as we endeavour to emerge safely from this lockdown, artists and musicians will have a proper opportunity to play their part through live music to restore the cultural, social and economic well-being and success of our society,” Mr Rice said. Additional reporting – PA