US Democratic National Convention kicks of as a mostly virtual affair 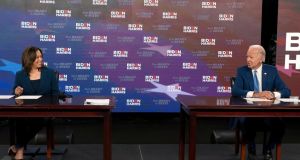 Washington Correspondent Delegates are gathering virtually on Monday for the Democratic National Convention as they prepare to officially nominate former vice president Joe Biden as the party’s presidential candidate later this week.

The four-day convention – traditionally the highpoint of the US election-year calendar – has been moved to a mostly virtual affair due to the coronavirus pandemic. It had been scheduled to take place in Milwaukee, Wisconsin in July, but was switched to August due to Covid-19. Republicans will hold their convention next week.

While some Democratic officials are travelling to Milwaukee for the event, the bulk of the activity will happen over four consecutive nights online. Mr Biden will accept his party’s nomination at the Chase Center in Wilmington, Delaware on Thursday night. Kamala Harris, who was named by Mr Biden last week as his running mate, will address the convention on Wednesday night.

Sources suggested some Republicans – possibly including former secretary of state Colin Powell – could address the convention, a sign of growing discontent towards Donald Trump’s presidency in some parts of the Republican establishment.

Among the first to address the gathering will be Michelle Obama, who will speak on Monday night. The former first lady was widely believed to have given the best speech of the 2016 Democratic convention, when she delivered her now infamous motto “when they go low, we go high”. She remains a highly popular figure among Democrats.

Also scheduled to appear on the first night of the convention – which will be broadcast between 9pm and 11pm each night on the east coast of the US – will be Bernie Sanders. Tensions between supporters of the socialist senator from Vermont and Democratic nominee Hillary Clinton overshadowed the 2016 convention, though Ms Clinton was ultimately selected. But in a show of unity, Mr Sanders – who competed with Mr Biden for the party’s nomination this year and finished well ahead of him in early primaries and caucuses – will address the convention on Monday, in a nod to the left-wing part of the Democratic party.

On Tuesday, former president Bill Clinton and congresswoman Alexandria Ocasio-Cortez are among the speakers – again, an effort to reflect the broad ideological spectrum of the Democratic party which has struggled with tensions between its more progressive and moderate wing in recent years.

Former secretary of state Hillary Clinton will speak on Wednesday, as will former president Barack Obama.

Among the “rising stars” selected to deliver keynote addresses are two Irish-American members of Congress, Brendan Boyle and Conor Lamb. Both represent Pennsylvania, a key swing state, and were early backers of Mr Biden.

While the traditional networking and off-site parties that characterise the annual party conventions may be on hold this year, a host of events will take place during the week including meetings of various caucuses such as the Hispanic and Labour caucus, as well as LGBTQ and rural groups.

The main business of the convention – the votes of delegates who represent each state and officially nominate the president – will be conducted remotely.

Mr Biden’s nomination as the party’s presidential candidate is assured, as he has already reached the threshold of 1,991 delegates required to win the nomination.

Meanwhile, US president Donald Trump has announced he is hitting the campaign trail this week, holding a series of election events in key swing states across the country. It begins with an appearance on Monday in Wisconsin – just as the Democrats’ convention begins. He will also visit Minnesota and Arizona, before holding a rally in the electorally-important state of Pennsylvania on Thursday, hours before Mr Biden is due to deliver his acceptance speech. The Republican campaign team is also launching a huge digital advertising blitz this week to coincide with the Democrats’ convention.

With the Republican National Convention due to take place next week, Mr Trump has said he may deliver his nomination acceptance speech at the Gettysburg battleground in Pennsylvania or at the White House, though he is thought to favour the latter.

Though the Hatch Act prohibits White House officials from using the official residence for political activities, the president and vice president are exempt from the rule. In practice, however, previous presidents have tended not to hold election-related events at the White House.