Biden urges US mask mandate to deal with Covid-19 pandemic 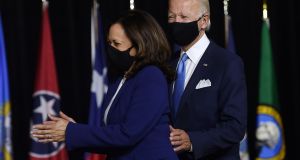 Democratic US presidential candidate Joe Biden has called for a national mask mandate to be introduced to combat the coronavirus pandemic, following a briefing with public health advisers.

Mr Biden and running mate Kamala Harris were briefed by officials on coronavirus in Wilmington, Delaware, a day after making their first public appearance together since Ms Harris was added to the Democratic ticket.

“Every single American should be wearing a mask when they’re outside for the next three months, at a minimum,” said the former vice-president. “Every governor should mandate mandatory mask wearing.” He added that experts had advised that widespread wearing of masks could save more than 40,000 lives in that period.

“It’s not about your rights,” he said. “It’s about your responsibilities as an American . . . Be a patriot. Protect your fellow citizens . . . Do the right thing.”

Mr Biden was speaking as infections continued to spread in the United States, with 163,000 deaths now reported. Almost 1,500 deaths were registered on Wednesday alone – the highest single-day total in August.

The Biden campaign is expected to focus heavily on Donald Trump’s handling of the pandemic in coming weeks as the presidential campaign heats up.

Ms Harris highlighted Mr Trump’s handling of the virus outbreak in her debut speech as the vice-presidential nominee on Wednesday.

“The president’s mismanagement of the pandemic has plunged us into the worst economic crisis since the Great Depression,” she said, noting that an American dies of Covid-19 every 80 seconds.Mr Biden and Ms Harris wore masks as they entered the room where they delivered their speeches and maintained a social distance during the event.

The issue of mask wearing has become highly politicised in the US. While Mr Trump has rarely been seen wearing a mask, in recent weeks he has encouraged citizens to wear a face covering.

Also on Thursday the Biden campaign confirmed it had seen a surge in fundraising since Ms Harris’s appointment was announced earlier this week.

Speaking at a private grassroots fundraiser on Wednesday evening, Mr Biden said that $26 million (€22 million) had been raised in the 24 hours after Ms Harris’s nomination was announced. This was followed by a further $6.2 million on Wednesday, the campaign confirmed.

Ms Harris’s strong track record in securing donations during her campaigns for political office is likely to be a boon to the Biden-Harris ticket.

While Mr Biden had been trailing Mr Trump for much of early 2020 in terms of fundraising, he has been closing the gap since March when the Democratic establishment rallied behind his candidacy.

Mr Biden and the Democratic National Committee more broadly raised $141 million in June – $10 million more than Mr Trump, though the Trump campaign has significantly more cash on hand as the presidential election approaches in November.

Mr Trump, who is trailing Mr Biden in the polls, renewed his attacks on Ms Harris in an interview on Thursday, describing the Californian senator as a “mad woman”. In a morning radio interview with Fox Business, he said Ms Harris was part of a group of “seriously ill people” who had questioned Brett Kavanaugh during his confirmation hearing to become a supreme court justice.

During the interview, Mr Trump also appeared to admit that his recent threats to cut funding for the postal service was linked to efforts to suppress mail-in votes.

“They need that money in order to make the post office work, so it can take all of these millions and millions of ballots,” he said. “If we don’t make a deal, that means they don’t get the money. That means they can’t have universal mail-in voting, they just can’t have it.”

Mr Trump has consistently queried the trustworthiness of postal voting, amid expectations that there will be an increase in mail-in ballots in the election due to the pandemic.

Responding to the president’s comments, Mr Biden’s campaign accused Mr Trump of “sabotaging a basic service that hundreds of millions of people rely upon”.

In some good news for the president, data released on Thursday showed that the number of Americans filing for state unemployment benefits fell below one million last week for the first time since March.