Trump homes in on White House or Gettysburg for nomination speech 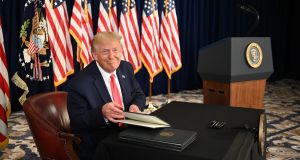 US president Donald Trump will accept the Republican Party’s presidential nomination at the White House or at Gettysburg, the civil war site where Abraham Lincoln delivered his most famous address.

Mr Trump tweeted that a decision would be made soon on the location for his acceptance speech later this month, but the search had been narrowed to two locations.

It follows his decision to cancel the Jacksonville portion of the Republican National Convention due to the coronavirus pandemic, though party delegates will gather in Charlottesville, North Carolina, on August 24th to begin the nomination process.

Mr Trump’s suggestion last week that he could deliver his acceptance speech – traditionally the highpoint of the party convention season in election year – at the White House prompted criticism from Democrats, who accused him of politicising the office of president.

The Hatch Act forbids the use of government property for political activities, though the president and vice-president are exempt. However, most past presidents have kept political events and campaigning off White House grounds.

Gettysburg in Pennsylvania is one of the most famous civil war sites in the United States and the location for a decisive victory for the North against the Confederate south led by Robert E Lee.

It is also where Abraham Lincoln – the first Republican president – delivered the Gettysburg address, one of the most famous speeches in American history, in 1863.

Mr Trump has previously compared himself to Lincoln, whose victory in the civil war led to the abolition of slavery. In May the president conducted an interview with Fox News on the steps of the Lincoln Memorial, one of the most iconic sites in Washington DC.

The choice of Gettysburg may also be electorally advantageous to Mr Trump. He narrowly won Pennsylvania in 2016, but polls show that his Democratic rival Joe Biden, who was born in the state, is leading there.

Meanwhile, Mr Biden is due to name a vice-presidential candidate this week, ahead of next week’s Democratic National Convention, which will be held virtually due to the coronavirus pandemic.

Mr Biden has already committed to choosing a female candidate, and there is speculation he could select a woman of colour. Among those under consideration by the former vice-president are senator Kamala Harris, a former attorney general of California and one-time presidential hopeful; Tammy Duckworth, an Iraq war veteran who represents Illinois in the Senate; and former national security adviser Susan Rice.

Mr Biden’s team confirmed last week that the former vice-president would not be travelling to Wisconsin for next week’s convention as planned. The date for the convention had already been moved from July to mid-August earlier this year due to coronavirus. Mr Biden is expected to accept his party’s nomination for president on Thursday, August 20th, while senior party figures are due to participate virtually in a week-long programme of evening events.

Meanwhile, the US’s coronavirus cases continued to rise on Monday, passing the five million mark. The US now accounts for about a quarter of all global cases of the virus.

Texas and Florida have now topped 500,000 cases, though Florida’s daily case total of 4,000 on Monday marks a decrease on recent days.

As the debate over reopening schools intensified in the US, new figures showed that almost 100,000 children tested positive for Covid-19 in the last two weeks of July.