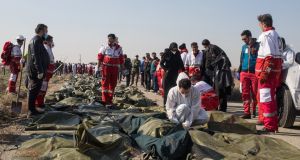 Emergency services with victims’ remains near the site of the Ukraine International Airlines disaster on the outskirts of Tehran on January 8th. Photograph: Arash Khamooshi/The New York Times

When a Ukrainian airliner was shot down by Iran’s Revolutionary Guard just moments after take-off from Tehran last month, what struck home was that the big lesson of Flight MH17 about the dangers of flying over the world’s worst conflict zones still has not been learned.

Five years ago, on July 17th, 2014, a Malaysia Airlines jet with 298 passengers and crew on board was cruising at 33,000 feet over eastern Ukraine when it was hit by a Russian-made surface-to-air-missile that scattered its wreckage over 50sq km.

Investigations in the aftermath showed that from April of that year international aviation agencies had warned pilots and airlines to avoid Ukrainian airspace because of the dangers posed by the war in the Donbass region between the Ukrainian government and Russian-backed separatists.

Why had that expert advice been ignored? Money, plain and simple.

“Like a number of other carriers, Malaysia Airlines continued to fly across the conflict zone to Kuala Lumpur because it was the shortest route and therefore the quickest and the cheapest in terms of fuel,” said Norman Shanks, former head of security at airports group BAA.

In addition, the conventional wisdom in the aviation industry at the time was that 33,000 feet was beyond the reach of any conventional missile used in ground conflict.

Although there’s consensus in the West about what happened in the case of Flight MH17, it remains a matter of international dispute between the Netherlands – which lost 193 men, women and children – and Russia, which still denies any responsibility for the disaster.

In the case of Ukraine International Airlines Flight 752, by contrast, Iran’s denial of responsibility lasted only three days.

The bottom line, said Ukraine International Airlines, was that – given local tensions over the US assassination of Qassem Suleimani and Iran’s response with a barrage of ballistic missiles targeting American installations in Iraq – “officials should have closed the airport”.

Not surprisingly, the loss of 176 lives in the Tehran crash has shocked the Netherlands, and raised difficult questions about whether believing the lessons of Flight MH17 really had been learned internationally was anything more than wishful thinking.

As if to underline that question, a parliamentary debate last week was told that Dutch national carrier KLM flew over Iraq on the morning of January 8th, after an Iranian rocket attack on a US military base, and before the downing of the Ukrainian jet.

D66, a centre-left partner in Mark Rutte’s coalition government, called for airlines to be stripped of discretion to decide how to respond to serious conflict – and for responsibility to be transferred instead to individual governments or to the European Aviation Safety Agency (EASA).

“The commercial interest of an airline doesn’t always match the public interest,” the party warned.

Former finance minister Jeroen Dijsselbloem, now chair of the Dutch Safety Board, agreed that while such a move was not advocated in the board’s MH17 report, the fact that a follow-up study showed little progress in agreeing new international safeguards suggested that radical action was now necessary.

“This has to be an issue for governments, particularly in an EU context,” he argued.

Unusually, Tjibbe Joustra, chair of the safety board at the time of the MH17 disaster, took issue with his successor, warning that the danger of transferring responsibility away from airlines was that it underestimated the degree to which pilots were sometimes updated with crucial threat information even while in the air.

To transfer that responsibility from highly experienced airlines to government or even the EASA could introduce unnecessary “rigidity” into the system at times of crisis, Joustra warned.

What both Dijsselbloem and Joustra could agree on was that the latest loss of life in the Tehran crash left “a very bitter taste”, as Joustra – a former national counterterrorism co-ordinator – put it, just 5½ years after the tragic scenes in the sunflower fields of Ukraine.

“The simple fact is that our international response has been insufficient, and this crash in Iran is a long overdue wake-up call for all of us to finally take the lessons of MH17 seriously.”

1 Father of rescued teenager: ‘They had a target, their aim was to get to the island’
2 Housing activists assist tenants to re-enter property following eviction
3 Garda killer Aaron Brady will be almost 60 by time he leaves prison
4 Donald Trump indulges false ‘birther’ theories about Kamala Harris
5 Covid-19: Taxi drivers, plumbers and carpenters among self-employed to get new €1,000 grant
Real news has value SUBSCRIBE