He had savaged all his fellow Republicans and yet here they were, his Praetorian guard 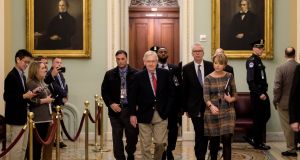 Republicans know very well who they are. That’s why it was such a juicy moment when Hakeem Jeffries, the congressman from Brooklyn and Democratic impeachment manager, quoted a lyric by fellow B-town native son Biggie Smalls to rebut Jay Sekulow when the president’s lawyer disingenuously wondered, “Why are we here?”

Referring to the Democrats’ crystal-clear case that Donald Trump abused his power and corrupted the highest office in the land, Jeffries proclaimed, “And if you don’t know, now you know.”

I went to the press gallery one afternoon to check out the tableau vivant. The visitors’ gallery was only half full, and there was none of the passion and titillation that infused the Clinton impeachment, which also, oddly enough, revolved around a power disparity between two people.

One Democratic Senate staffer mourned the apathy. “Our phones aren’t ringing,” he told me. “Nobody cares. It’s the saddest thing ever.”

Mitch McConnell is resorting to his Merrick Garland playbook. He’ll let the Democrats make all their noble points, but it’s Kabuki. Republicans have perfected the dark art of “there’s nothing to see here, just keep moving”. McConnell long ago choreographed the end, with Democrats losing the argument and the acquitted scoundrel triumphantly sweeping into the Capitol to make his State of the Union address.

Some Republicans were paying attention at the trial – or wanted to be seen paying attention. Susan Collins was glued to the proceedings, as was the senator to her left in a magma-coloured shawl, Lisa Murkowski. Republicans like Collins who are vulnerable in 2020 have to be alert and figure out how to find their way out of the hearings without doing more political harm. A Trump confidant told CBS News that Republican senators were warned, “Vote against the president and your head will be on a pike.”

Seated at the back of the class, Mitt Romney looked dutiful, and the thought must have crossed his mind that’s he’s in a position to inflict payback on Trump for calling him “a pompous ass” and tricking him into an interview for secretary of state only to humiliate him. (Revenge is a dish best served with milk.)

But more senators on the Republican side were telegraphing boredom. Lindsey Graham yawned and rearranged his yellow pencil and went on walkabouts, later telling reporters, “About the fourth time you tell me the same thing is twice too much.” He cleaved to his lap-dog role, saying preposterously of Trump: “What he wants to do is get to the truth.”

Tom Cotton played with the fidget spinner Richard Burr had handed out to all the Republicans. Marsha Blackburn and others left to trash the proceedings on Fox News.

The senators in the Democratic presidential race could not have been happy to be stuck there, either. Bernie Sanders, accustomed to making like Leonard Bernstein at big rallies and upset he’s not in Iowa to relish his surge, had a hard time keeping his hands still, moving them restlessly, silently clapping, and finally holding them together on his chest over his blue sweater.

But heads on both sides did snap to attention whenever that unholy, jangly, self-impeaching peal, so inescapable in the last three years, rang out in the hallowed chamber. Trump’s voice was impossible to ignore when the House impeachment managers played incriminating video clips of the human fidget spinner himself, sometimes howling over the blades of his chopper on the South Lawn.

So many people in this very room had tried and failed, or are now trying, to vanquish the guy. Romney, Cruz, Rubio, Graham, Klobuchar, Sanders, Bennet, Booker, Gillibrand, Warren, Harris. Trump had savaged all his fellow Republicans and yet here they were listening to an unending recitation of his crimes and coming out to be his Praetorian guard.

But the more impressive the Democrats’ case is, the more depressing the reality becomes

Adam Schiff tried to warn the former nemeses turned defenders of Trump that if the president is not removed, he could turn on them the way he had turned on Marie Yovanovitch and Joe Biden, using the power of the presidency to cheat, lie and smear. (Now Rudy’s buddy Lev Parnas says he has forked over to congressional Democrats a 2018 recording of Trump personally ordering Yovanovitch to be fired.)

“The next time, it just may be you,” Schiff told the Republican senators. “Do you think he wouldn’t ask you to be investigated? Do you think for a moment that he wouldn’t?”

Schiff also reminded Republicans that Trump had inverted their dogma, embracing the Evil Empire and authoritarianism and trusting Crazy Rudy’s conspiracy theories over his own intelligence services.

“You don’t realize how important character is in the highest office in the land until you don’t have it,” Schiff said.

But the more impressive the Democrats’ case is, the more depressing the reality becomes. They want to convince themselves that character matters. But many Americans knew they were voting for a thug. They wanted a thug who would bust up Washington, and they got one.