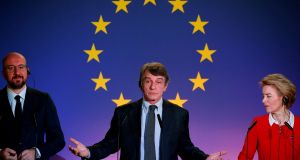 EU leaders marked Friday’s midnight Brexit formally with speeches expressing regret but resolutely facing into the future challenges of climate change and the digital revolution. It was an upbeat message, as Union Jacks came down off the institutions and a memo went out to 3,000 staff reminding them not to share internal communications with their erstwhile partner’s diplomats.

The UK now enters 11 months of transition – but outside the EU.

It’s not the end of the world. “The story does not end here,” European Parliament president David Sassoli told journalists. Far from it. Europe faces the future and its many challenges UK-less, but with plenty of confidence.

Commission president Ursula von der Leyen quoted Jean Monnet, architect of European construction: “I am not pessimistic. I am not optimistic. I’m determined.”

Some 700 UK citizens remain on the commission payroll and its spokesman was insisting that there is no question about their loyalty.

The presidents of the three central institutions, von der Leyen, David Sassoli and EU Council president Charles Michel, spoke to journalists in the visitors’ centre of the parliament.

Michel, who admitted his “mixed feelings” at the UK departure, emphasised the immediate challenge of making the EU more accountable and loved by citizens, and reiterated the mantra heard from all EU leaders recently that although “the EU wants the closest possible future relationship with the UK ”,the “more the UK diverges from EU standards the less access it will have to the single market”.

He rejected the suggestion that Brexit might represent the beginning of the end of the EU and argued that, on the contrary, they were seeing that very rare alignment of the planets in which MEPs, the council and commission are now working off a common agenda. He said that unity is never a given or easy, but required constant effort.

'Without rules, the strongest will prevail and the weakest will be excluded. And the EU does not want that.’

Von der Leyen said the central challenges are climate change and digitalisation. On both, she said, the “new chapter that Brexit represents in the EU’s history” must see it lead on a global level. “Strength does not lie in splendid isolation but our unique collaboration,” the president said, insisting that the UK would find a strong new relationship with the union, “but never as good as membership”.

She spoke of the extraordinary, “very precious” experience of 3½ years of unity of the 27 in securing the withdrawal agreement that allowed the safeguarding of citizens’ rights, the securing of a financial settlement, and “the protection of our member state Ireland”.

In an impassioned response to one reporter, Sassoli asked “why does everyone want to divide us today? Because when there are common rules, we live better and defend those who are weaker. Where there are no rules, only the strongest prevail. Perhaps those who want to divide us are afraid of a world with rules.

“ At this moment, I believe that the EU’s importance lies in the answer that we are able to give to this question,” Sassoli added. “Not only for us, but for a global world that has to live by rules. Without rules, the strongest will prevail and the weakest will be excluded. And the EU does not want that.”

On Monday – as soon as possible after Brexit – the commission will publish its draft negotiations mandate for the talks with the UK on the future relationship.

Brussels said its own farewell on Thursday night. The mayor of this very Anglophile city ordered the lighting up of the Grand Place, the city’s magnificent central cobbled square, in the colours of the Union Jack. Bands played British and a few Irish airs.

There was an authentic London taxi, a red phone box, busby-toting sentries, and Sherlock Holmes and Dr Watson were to be seen. Out, they explained, on their most important inquiry yet, the search for the best frites in Brussels.

And the iconic Manneken Pis, a miniature statue of a small boy peeing in a fountain, was dressed up as John Bull. An affectionate but not entirely reverent farewell.