US Senate votes 51-49 against calling witnesses in Trump trial, clearing way for acquittal

By a vote of 51-49, the Republican-controlled Senate has stopped Democrats' drive to hear testimony from witnesses and collect new evidence in US President Donald Trump's impeachment trial. Video: Reuters 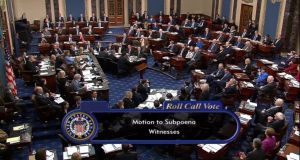 The US Senate voting on the need for testimony by witnesses during the impeachment trial against US president Donald Trump in the Senate at the US Capitol in Washington, DC. Photograph: US Senate TV/EPA

The US senate voted by 51-49 against calling witnesses in the impeachment trial of Donald Trump on Friday in a major setback for Democrats.

However, a final vote on whether to remove the president from office was deferred.

Despite Democratic hopes earlier this week that several Republicans would cross the aisle and vote to subpoena witnesses after damaging allegations by former national security advisor John Bolton surfaced, only two Republicans - Mitt Romney of Utah and Susan Collins of Maine- voted to call witnesses. Democrats has needed at least four Republicans to cross the aisle, but two key senators - Lisa Murkowski of Alaska and Tennessee senator Lamar Alexander - announced that they would oppose the idea of calling witnesses ahead of the crunch vote.

The development means that the impeachment trial is now approaching the end, with Mr Trump expected to be acquitted.

The developments came as the New York Times reported new details about Mr Trump’s dealings with Ukraine contained in a forthcoming book by Mr Bolton. Specifically, the article claimed that Mr Trump instructed Mr Bolton, in the presence of senior aides including chief of staff Mick Mulvaney and the president’s lawyer Pat Cipollone, to secure damaging information about Democrats from the Ukrainian government - two months before the infamous July phone call between Mr Trump and Ukrainian president Volodymyr Zelensky which prompted the impeachment inquiry.

While Democrat Adam Schiff cited the new information as he made the House impeachment managers’ closing statement on Friday afternoon, the revelations did not move minds.

Ms Murkowski dashed Democrats’ hopes that she would join senate colleagues Romney and Collins, issuing a statement just as the senate session started, confirming that she would not vote to call witnesses.

“The House chose to send articles of impeachment that are rushed and flawed,” she said. “I don’t believe the continuation of this process will change anything. It is sad for me to admit that, as an institution, the Congress has failed.”

Other Republicans doubled-down on their support for Mr Trump as they entered the senate chamber for what could be the last session in the impeachment trial.

Senator Marco Rubio said he was not prepared to remove the president from office over his actions. “Just because actions meet a standard of impeachment does not mean it is in the best interest of the country to remove a President from office,” he said, adding that a vote to remove Mr Trump “would inflict extraordinary and potentially irreparable damage to our already divided nation.”