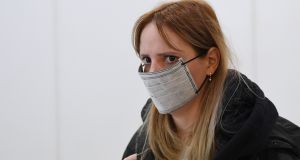 A woman wearing a face mask arrives at Heathrow Airport in London. The UK is to begin monitoring direct flights from China to stem the spread of the coronavirus in Britain. Photograph: Andy Rain/EPA

All 14 people tested for coronavirus in the UK - including one in Belfast, have been given the all-clear but checks are ongoing on other people, the Chief Medical Officer for England has said.

All the people tested in the UK are thought to have visited Wuhan — the Chinese city where the outbreak originated.

Four out five patients tested in Scotland were from China, Downing Street said. Another patient was tested at Belfast’s Royal Victoria Hospital.

In a statement, Professor Whitty said: “I am working closely with the other UK chief medical officers.

“We all agree that the risk to the UK public remains low, but there may well be cases in the UK at some stage.

“We have tried-and-tested measures in place to respond. The UK is well prepared for these types of incidents, with excellent readiness against infectious diseases.

As he left the Cabinet Office after the Cobra meeting, Mr Hancock said the risk to the UK public “remains low”.

Meanwhile, the official death toll in China has risen to 26, with more than 830 confirmed cases.

The Chinese city of Wuhan is rapidly building a new 1,000-bed hospital to treat victims, while Disneyland Shanghai and parts of the Great Wall of China have been closed to visitors.

Reuters reported that hospitals in Wuhan are struggling to cope due to medical shortages.

Other cases have been reported in countries including Japan, South Korea, Singapore, Thailand, the US and Vietnam.