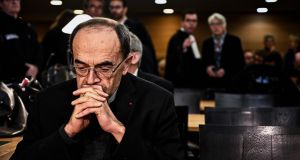 French cardinal, Philippe Barbarin, has been acquitted of covering up the sexual abuse of minors in his flock. Photograph: Jeff Pachoud/AFP/Getty Images

A cardinal has had his conviction for covering up the sexual abuse of minors overturned, in a case that rocked the French Catholic Church.

Philippe Barbarin said he will ask Pope Francis to allow him to resign – repeating a request that was refused earlier by the pope, who wanted to await the outcome of the appeals trial.

Thursday’s court decision “allows me to turn a page and for the church of Lyon to open a new chapter”, Cardinal Barbarin said at a brief news conference. He said he would go to Rome to “renew my request”.

Initially, the appeals court in the south-eastern French city of Lyon gave no explanation while pronouncing its decision to wipe the legal slate clean for Cardinal Barbarin. The court later released a 38-page document with the reasoning behind its decision and said it found no “intentional element” showing a cover-up.

Cardinal Barbarin, archbishop of Lyon, had been convicted in March and given a six-month suspended sentence for failing to report a predator priest to police.

A lawyer, Yves Sauvayre, representing victims in the cover-up case against the cardinal, said they planned to appeal to France’s highest court.

The verdict comes at a time of increasing scrutiny around the world of the Catholic Church’s role in hiding abuse by its clergy.

The prosecutor’s office had sought the acquittal accorded by the court, as it did in Cardinal Barbarin’s initial trial in March, in which he was convicted and handed a six-month suspended prison sentence.

Prosecutors had recommended already in 2016 that the case be dropped because of a lack of proof of a cover-up.

“This decision is logical,” one of Cardinal Barbarin’s lawyers, Jean Felix Luciani, said outside the courtroom. He said the cardinal had faced down “public rumour and calumny”.

Cardinal Barbarin (69), said at his appeals trial in November that he had filed an appeal because “I cannot see clearly what I am guilty of”.

The court had ruled that the cardinal, “in wanting to avoid scandal caused by the facts of multiple sexual abuses committed by a priest ... preferred to take the risk of preventing the discovery of many victims of sexual abuse by the justice system, and to prohibit the expression of their pain”.

Bernard Preynat, the now-defrocked priest at the centre of the scandal, described to a court at his trial earlier this month how he systematically abused boys over two decades as a French scout chaplain.

Preynat said his superiors knew about his “abnormal” behaviour as far back as the 1970s. “Had the church sidelined me earlier, I would have stopped earlier,” he said.

Preynat, now 74, faces up to 10 years in prison in what is France’s biggest clergy sex abuse trial to date.

He is suspected of abusing around 75 boys but his testimony suggests the overall number could be even higher. That verdict is expected in March.

The case against Cardinal Barbarin hinged on a 2014 discussion with victim Alexandre Hezez, who told the cardinal about the sexual abuse he had suffered in the 1980s by Preynat during scout camps. Mr Hezez felt the priest should no longer lead a parish.

Cardinal Barbarin told the appeal hearing that he followed Vatican instructions after that discussion with Mr Hezez. He suggested he could not have done more.

At the trial of Preynat, victims testified about how much power the priest had held over them and the lifelong damage that his abuse caused. “I saw this community that admired this man, and I was his protege, his pet,” said abuse victim Francois Devaux.

Mr Devaux had a sober reaction after Thursday’s court ruling, saying “It is a disappointment.” – AP