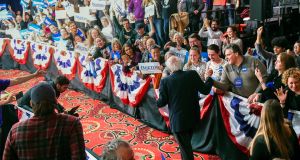 The Iowa caucuses descended into chaos on Monday night after the results were delayed due to “inconsistencies” in the reporting.

The Iowa Democratic Party announced that the results of the first-in-the-nation caucus were delayed over “quality control” issues. It later said it expected to release results later on Tuesday.

The confusion emerged as precinct “captains” in sites across the state reported difficulties in communicating their caucus results to Democratic headquarters in the capital, Des Moines. Some reported being put on hold for hours on the designated hotline following difficulties using an app that had been specially designed for the caucuses.

Eligible voters across Iowa gathered at almost 1,700 sites at 7pm on Monday to “caucus” for a prospective Democratic nominee for president – the first stage in the process of selecting a candidate. But by 9.30pm, when most precincts had expected to have filed their results, there were signs of delays.

Anecdotal evidence suggested that Bernie Sanders was leading in the caucuses, with Indiana mayor Pete Buttigieg also doing well, benefiting in particular from transfers from voters whose first preference failed to meet the 15 per cent threshold.

Mr Sanders, who flew into Des Moines on Monday evening having attended US president Donald Trump’s impeachment trial during the day, addressed supporters at an airport hotel. Referencing the delay, he said that he had “a good feeling we are going to be doing very, very well here in Iowa.”

“The message that Iowa has sent to the nation is a message shared by the American people. That we want a government that represents all of us, not just wealthy campaign contributors and the one per cent.”

The other main candidates also delivered speeches, despite not knowing the results of the caucuses.

Mr Buttigieg said at his headquarters: “So we don’t know all the results, but we know by the time it’s all said and done, Iowa you have shocked the nation, because by all indications, we are going on to New Hampshire victorious.”

Former vice-president Joe Biden, who was facing pressure in Iowa, said the indication was that “it’s going to be close”.

But in a strongly-worded letter to the Iowa Democratic Party released by his campaign, he demanded “full explanations and relevant information” before any final results are announced.

“The app that was intended to relay caucus results to the party has failed; the party’s back-up telephonic reporting system likewise has failed,” the letter stated.

Monday night’s confusion raised election integrity issues at a time when the Democratic National Committee has been working hard to prevent election interference and misinformation in the primary campaign.

A highly-anticipated poll by the Des Moines register on Saturday night was also scrapped at the last minute after a candidate raised questions about the process.

Several Trump supporters seized on the chaos unfolding in Iowa as proof of election rigging. “Mark my words, they are rigging this thing ... what a mess,” tweeted the president’s son, Eric. “This is why people don’t want the #Dems running our country. #meltdown.”

Others questioned the wisdom of starting the Democratic process of selecting a candidate with a caucus in Iowa, given that only a small fraction of eligible Democrats in the state actually partake.

The candidates’ focus will now turn to New Hampshire where the first primary of the campaign will take place on February 11th, followed in quick succession by Nevada and South Carolina.

Both Bernie Sanders and Elizabeth Warren are expected to perform well there as both hail from neighbouring states.

Typically, the candidate who wins Iowa goes on to become the nominee, though there are some exceptions, such as Bill Clinton in 1992.

A record number of candidates are contesting the Democratic primary race this year, meaning the race is more fluid than usual. While Mr Biden has been ahead in the polls nationally, his lead is marginal, and he is behind Mr Sanders in Iowa and New Hampshire.

The Iowa caucus takes place as Mr Trump’s impeachment trial reaches its conclusion and just ahead of his annual State of the Union address to Congress, which takes place on Tuesday night.