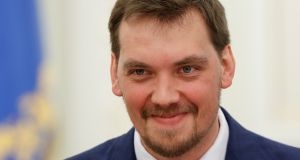 Ukrainian prime minister Oleksiy Honcharuk: Did not deny that it was his voice on the tapes, but said they had been edited to create a false impression. Photograph: Valentyn Ogirenko/Reuters

Ukrainian president Volodymyr Zelenskiy has rejected prime minister Oleksiy Honcharuk’s offer to resign after being allegedly caught on tape telling other officials that the novice head of state had only a “primitive” grasp of economic issues.

In exchanges that have been leaked to the media, a man sounding like Mr Honcharuk expresses frustration at the difficulty of explaining economic reforms and developments to the public and to Mr Zelenskiy, a career comedian who last year secured a landslide election victory just months after entering politics.

“Zelenskiy has a very primitive, simple understanding of economic processes,” says the man who seems to be Mr Honcharuk, adding that the president requires simple explanations, such as how changes in the value of Ukraine’s currency will affect the price of Olivier salad, a favourite festive party dish across the post-Soviet world.

“You need to tell him: ‘Look, Vova, the fact that the exchange rate is now lower means that next year the Olivier on the New Year’s table won’t cost more than this year.”

Mr Honcharuk did not deny that it was his voice on the tapes, but said they had been edited to create a false impression.

While strongly defending the work of his government – which took power in August after Mr Zelenskiy’s new Servant of the People party dominated parliamentary elections – Mr Honcharuk said on Facebook that he had offered to quit “to remove any doubt about our respect and trust towards . . . the president.”

“I’ve decided to give you and your government a chance, if you can resolve certain things that are very important and very concerning for our society today,” Mr Zelenskiy told the premier in a meeting on Friday evening.

“Now is not the time to shake the state, economically and politically.”

Mr Zelenskiy asked Mr Honcharuk to draw up proposals for new salary levels for senior members of government ministries and state companies, which would better reflect “the situation that our economy is in”.

“When you and your government improve the economy, then it will be possible to raise these salaries,” Mr Zelenskiy said.

He also urged Mr Honcharuk to replace any government officials who were not capable of pushing through key reforms.

“I have no grounds to think that any of them are dishonest or that they are unprofessional . . . But we want to strengthen the government. So I ask you strongly to find the weak spots and change some or other heads of ministries according to their professional results.”

Mr Honcharuk said he looked forward to continuing as premier, calling the role “an important task, a big honour”.

“I demand that within a fortnight, as soon as possible, we find out who made the recordings . . . Find out who did it and deal with it,” he told them.

“Unauthorised eavesdropping and recording of conversations should not happen in the offices of state authorities at all levels, because it is a question of national security.”