Storm Brendan: Gusts of up to 128km/h to hit UK

Met Office warns that disruption to travel is ‘likely’ 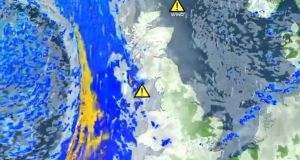 Storm Brendan: There may be some short-term loss of power and other services. Photograph: Met Office

Gusts of up to 128km/h could hit parts of the UK as Storm Brendan sweeps in, prompting the Met Office to issue a weather warning.

Britain has issued a weather warning covering the next two days, warning of wind for much of the western half of the UK.

Storm Brendan is expected to plague Ireland until 9pm, bringing with it a significant risk of coastal flooding, while the warning of “a very windy period” is in force across the west of England, Scotland and Wales is in force from 10am on Monday.

The east coast will not escape the impact of the storm either, with winds of 65km/h to 80km/h.

The windy weather will persist for England and Wales on Tuesday as the storm continues to move east.

Met Office forecaster Simon Partridge said: “As it pushes though, pretty much every part of the UK will feel the influence.”

Everywhere in the UK will see rain on Monday at some point, he said, adding that the storm will move through pretty quickly.

The Met Office warning added that disruption to travel is “likely”.

Forecasters are warning that coastal routes, sea fronts and coastal communities may be affected by spray or large waves.

There may also be some short-term loss of power and other services.

Shannon Airport reported a number of cancellations including flights to and from Birmingham and London Heathrow. – PA