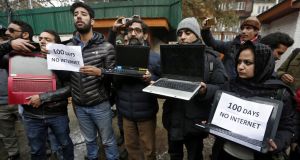 India’s supreme court ruled that the five-month digital lockdown imposed on the Kashmir region by Narendra Modi’s government is unlawful and gave the administration seven days to justify its continued use.

In a judgment on the constitutionality of internet restrictions, India’s highest court said on Friday that an indefinite internet suspension was “impermissible” and should only be enforced in “unavoidable” situations.

The three-judge bench also criticised the use of section 144, a colonial-era law banning public gatherings, used repeatedly over the past month by the ruling Bharatiya Janata Party (BJP) to stifle nationwide protests against a divisive new citizenship law.

“A complete broad suspension of telecom services, be it the internet or otherwise, being a drastic measure, must be considered by the state only if ‘necessary’ and ‘unavoidable”, wrote Justice NV Ramana in a more than 100-page judgment.

“Disagreement does not justify destabilisation,” wrote Mr Ramana. The power under section 144 “cannot be used as a tool to prevent the legitimate expression of opinion or grievance or exercise of any democratic rights”, he noted, adding that repetitive orders under section 144 would be an “abuse of power”.

The ruling puts pressure on Mr Modi’s government to restore order in the Kashmir valley by re-establishing access to the internet – a move it has resisted, citing national security concerns – and upholding democratic norms of freedom of speech and expression.

New Delhi imposed the communications blockade in August after stripping Jammu and Kashmir of its special status as an autonomous region of India. The government has defended the restrictions on telecoms services as necessary to preserve peace in the Muslim-majority region, control of which has been contested by Pakistan since independence.

Authorities have eased some of the controls in the region in recent months, including lifting roadblocks and restoring landlines and mobile phone services, but the internet is yet to be restored and senior Kashmiri political leaders are still in detention.

The clampdown has come under sharp criticism from human rights activists and US politicians, which has only intensified since the government took measures to suppress nationwide protests against its Hindu-first agenda.

Since December, police have stormed campuses and detained thousands of people in a crackdown critics say targets Muslims and activists

In order to shut off the internet, telecoms companies need to co-operate with an order from the government.

Since the protests broke out in December, police have stormed campuses and detained thousands of people in a crackdown critics say targets Muslims and activists. Authorities have banned public gatherings and shut off the internet outside of Kashmir, including in the capital New Delhi and in multiple districts of Uttar Pradesh, India’s most populous state of 200 million people.

“This is a very important judgment, now the government should understand what the supreme court has said and remove the internet block,” said Anas Tanwir, a supreme court advocate. “Wherever this is happening around India, with internet lockdowns and Section 144 being indiscriminately imposed, this judgment is going to have an effect.”

Asked whether the supreme court went far enough to protect civil liberties, Santosh Hegde, a senior court advocate said: “[It] could have very well like other courts in the world said that in matters of national security we will not intervene, but it has not done so. It has at least cautiously decided to show where a door could open in the future.”

Despite the supreme court’s direction to reassess whether the internet restrictions are necessary, it is unclear whether Mr Modi’s administration will lift the blocks and refrain from using section 144.

The supreme court, once counted on as a staunch defender of civil liberties, has been criticised for moving slowly to hear petitions on the Kashmir lockdown and the anti-citizenship law protests. – Copyright The Financial Times Limited 2020