Female teacher reported to be among dead, after boy opened fire in Torreón 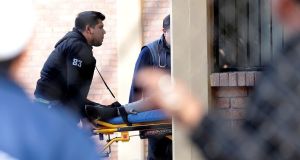 Paramedics carry a person on a stretcher after a shooting at a private school in Torreón, Mexico. Photograph: Jesus Ruiz/Reuters

At least two people are reported to have been killed and six injured, after a 12-year-old boy entered a school in northern Mexico with two handguns and opened fire.

The shooting took place on Friday morning in the city of Torreón, in Coahuila state.

Local reports suggested the attack at the Colegio Cervantes had claimed at least two lives.

One of the fatal victims was reportedly a female teacher, with some reports suggesting she had been the shooter’s target.

The other was the shooter, who police said had killed himself.

A graphic photograph published by Mexican news outlets showed what appeared to be the body of a young boy splayed out in a pool of blood, with a handgun lying on the ground.

Police chief Maurilio Ochoa told reporters six people had been wounded – five schoolchildren and a teacher – with two in a “delicate” condition in hospital.

Mr Ochoa said the shooter was believed to have entered his school with two weapons: a small-calibre handgun and a high-calibre weapon.

The boy’s parents and grandmother, with whom he lived, had said they had no idea how he acquired the guns.

“This is really regrettable,” Ochoa said, as anxious parents gathered outside the school‘s entrance.

He suggested backpack searches might be needed to prevent future tragedies.

“They tell me he was a boy who had very good grades, who lives – lived – with his grandmother ... It is very serious, so, so sad, and lamentable to see a primary school student do something like this.”

In an interview with the Mexican news channel Milenio TV, Mr Zermeño called the shooting an “atypical situation” that did not speak to the “peaceful society” that was Torreón.

“This is a city that likes to work and likes to live in peace,” he said.

In March last year eight students were shot in the city of Suzano in Brazil’s São Paulo state.

In 2011 a similar attack at a school in Rio de Janeiro claimed 12 lives.

One of the worst such attacks to take place in Mexico came in 2017 when a 15-year-old student killed himself after shooting four people at a school in the state of Nuevo León.

Mexico’s leftist president, Andrés Manuel López Obrador, is battling a major drug-fuelled security crisis which saw more than 31,000 people murdered last year alone. In the first eight days of this year, 41 people were murdered in the city of Tijuana, and more than 100 have died in Guanajuato state, according to local media reports. – Guardian