Volodymyr Zelenskiy under fire for dismissal of cabinet and prosecutor general 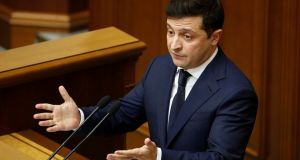 Ukrainian president Volodymyr Zelenskiy: there are claims his new government includes those with links to oligarchs and the political old guard the revolution sought to remove. Photograph: Valentyn Ogirenko

Ukraine’s new government has pledged to accelerate western-backed reforms begun by its predecessor, which was dismissed along with Kiev’s prosecutor general this week in moves that fuelled fears for the country’s political direction and anti-corruption fight.

Denys Shmygal was named prime minister on Wednesday in place of Oleksiy Honcharuk, who held the post for just six months before being replaced at the request of Ukrainian president Volodymyr Zelenskiy, who said his cabinet had failed to halt industrial decline, collect enough taxes and raise people’s standard of living.

Critics accused the inexperienced Mr Zelenskiy, a former comedian, of making a rash and populist decision, and said the new government included people with links to wealthy “oligarchs” and the political old guard that Ukraine’s 2013-2014 revolution aimed to drive from power.

“The change of the government means that we want even better and faster reforms in Ukraine, ” said Mr Shmygal.

“The government will continue prudent fiscal policy and constructive co-operation with the International Monetary Fund and other foreign creditors of Ukraine,” he added.

New finance minister Ihor Umansky said on Friday it was an “absolute priority” to finalise a $5.5 billion (€4.9 billion) loan deal with the IMF, when he met its resident representative in Kiev, Goesta Ljungman.

“We continue to work actively with the IMF colleagues to launch the new programme,” Mr Umansky said.

Those assurances will not satisfy critics of Mr Zelenskiy’s reshuffle, who say a number of new ministers have poor reform credentials and note that several posts remain unfilled because strong candidates refused to join Mr Shmygal’s government.

“We don’t know if Ukraine is back to the bad old days, but the picture is bleak. Every reformer and activist I know is depressed and determined to keep Ukraine on a pro-European path. All in all, Zelenskiy’s promises to fix Ukraine fast ring hollow.”

Mr Zelenskiy assured envoys in Ukraine from G7 states that the shake-up was intended to “improve the effectiveness of the work of the executive branch, and will not influence the stated priorities of domestic or foreign policy”.

Yet he did nothing to defend Mr Ryaboshapka, who was removed on the strength of votes from deputies belonging to the president’s own Servant of the People party and groups with pro-Russian views and links to oligarchs.

In his valedictory speech to parliament, Mr Ryaboshapka said he was being sacked precisely because his office was now fighting organised crime and corruption and had dismissed hundreds of compromised prosecutors.

“This is why you’re considering firing me. It is because those whom we ousted want to return and keep living the way they lived,” he said.

“I didn’t become anyone’s servant. I was and I am independent. An independent prosecutor can’t be forced [to do something], he can only be fired,” he added. “So I’m going. But I’ll be back.”