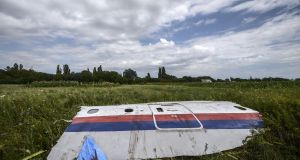 A piece of the wreckage of Malaysia Airlines flight MH17 in a field in Donetsk: the jet flying from Amsterdam to Kuala Lumpur on July 17th, 2014, was blown out of the sky. Photograph: Bulent Kilic/AFP

Four men, three of them with alleged links to Russia’s security services, are to be tried in their absence in connection with the shooting-down of Malaysia Airlines Flight MH17 in a landmark case that opens at a high-security court complex in the Netherlands on Monday.

The four are expected to be charged with the murder of the 298 passengers and crew on board the Boeing 777 passenger jet that was flying from Amsterdam to Kuala Lumpur on July 17th, 2014, when it was blown out of the sky over eastern Ukraine by a Russian-made Buk surface-to-air missile.

Thirteen of the witnesses due to give evidence in the case are expected to have their identities protected when they address the court because they face “significant risks” to their safety, according to the Dutch public prosecution service.

Prosecutors will tell a panel of three judges that the four suspects “form an unbroken chain” linking the breakaway Donetsk People’s Republic (DPR), from which the rocket was fired, to the Russian Federation, which they allege delivered the missile system to the pro-Russian separatists.

Russia has consistently maintained it played no part in the shooting-down of the jet. Its foreign ministry has warned that unsubstantiated claims should be regarded with scepticism given the amount of “fake news” that’s been generated by the disaster.

Summonses to appear before the Dutch court have been sent to the men’s last-known addresses, but there’s no way of knowing if they received them – and, in any case, Russia does not extradite its own citizens.

“They will be innocent until the contrary is proven in court,” said one member of the prosecution team, who says the men’s roles and the links between them will speak for themselves when they’re laid out in evidence.

Igor Girkin (also known as Strelkov), a former colonel with the Russian intelligence service FSB, was also minister for defence of the self-styled DPR and overall commander of its forces on the day that MH17 was shot down.

Sergey Dubinskiy (also known as Khmury), a member of the Russian military intelligence agency the GRU, was head of intelligence of the DPR, and deputy to Girkin.

Oleg Pulatov (also known as Giurza), a former special forces soldier with the GRU’s Spetsnaz unit – which has undergone a renaissance since Vladimir Putin became president – was Mr Dubinskiy’s deputy head of intelligence in Donetsk.

The only Ukrainian, Leonid Kharchenko, was commander of the DPR combat unit on the ground in the Donetsk region – and answerable to the other three.

The court is expected to hear telephone intercepts purporting to show that two of the DPR leaders were in contact with Vladislav Surkov, a senior aide to Mr Putin, and with Sergey Aksyonov, a leader appointed by Moscow in Russian-annexed Crimea.

Moscow has said it cannot verify the validity of the intercepts, while one separatist leader has called them “fake”.

Although there is value in putting the entirety of the evidence gathered by the joint investigation team from the Netherlands, Malaysia, Belgium, Australia and Ukraine on the court record, the odds must be that nobody involved will ever spend a day behind bars.

The majority of those who died on Flight MH17 were Dutch, but family and other relatives of all 10 nationalities involved are expected to arrive at the Schiphol Judicial Complex for the opening of the trial which is scheduled to continue, in five separate blocks, until March 2021.

Here too complications are being caused by coronavirus. Ultimately the court will have to be guided by the national health authorities, a spokesperson said.